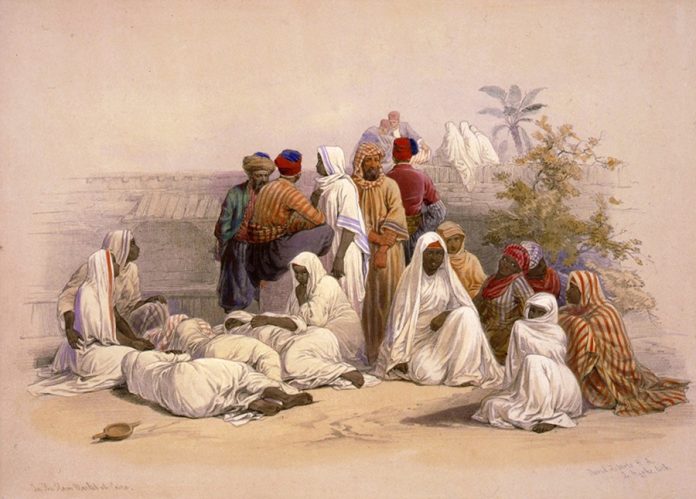 SLAVERY has been taking place since ancient times.

The word slave comes from north eastern Europeans called Slavs. Slavic groups were commonly bought and sold as slaves in other parts of Europe during the Roman and Moorish period.

Whites brought white slaves, particularly women, to slave markets and traded them for sugar, coffee and spices among other things.

Evidently enslaving people was an attribute of whites even before they began sourcing blacks from Africa.

There are portraits of white women being sold by whites to Moors. To attract buyers, they would be sold nude, to the astonishment of the potential buyers and other slaves.

Unlike the chattered slavery of the Transatlantic Slave Trade, in the Moorish period slaves were somewhat servants and were not equated to property or livestock.

Islam encouraged the freeing of slaves, especially if the slave became Muslim. It discouraged the enslavement of fellow Muslims and in Europe, non Muslims were made to pay tax (zakar).

In fact, the word tariff was derived from Tariq ibn Ziyad. Tariq was the Moor who conquered Spain militarily and Gibraltar (Jabal al Tariq) was named after him.

Whites who lived beyond Gibraltar were required to pay non-Muslim tax to Tariq, and when he became governor, this word was anglicised into tariff.

It should be noted that most of the Africans enslaved from West Africa during the Transatlantic Slave Trade were Muslims. Islam overtook Christianity as the world’s most popular and influential religion in the 8th Century CE.

The name Moor meant black and did not refer to one’s religion but race. Though most Moors were Muslim, some were Christian as was the case in Scotland.

The enslavement of non-Muslim Africans by Muslims of varying ethnicities was prevalent since the 7th Century CE.

In the east and by the coast of the Indian Ocean, Africans would find their way into India, Arabia, the Comoros islands and as far as Iran via Oman. Many travelled as traders, warriors and so on with some being slaves.

Their descendants can still be found in India and Pakistan and are known as Siddhi meaning lord, implying that most of them were lords and not serfs when they entered Asia.

Their being reduced into slaves was to do with the Hindu cast system which places blacks at the bottom of the social hierarchy and calls them untouchables or undesirables.

The Siddhi in India have it much worse than those in Muslim Pakistan as they live around Hindus and are still in perpetual slavery.

The cast system has preserved them pure and thus they look African in every way. That is until they start to speak.

They speak Indian languages, but have Arabic and Bantu ancestral names for people and objects. They call the drum ngoma and dance and sing like Africans.

On the Swahili coast of Africa, there is a large area that was called zenj/zanj. Zenj means one who knows not or does not follow the law and is often translated to heathen.

The Muslims called east Africans zenj because they were initially non-Muslim. In pre Islamic Arabia, it was the Judaic Sabaeans that came with the zenj concept and considered Arabians zenj because many of them were polytheistic and given to idolatry.

The closest region to the Arabian Peninsula is the Swahili coast besides the horn of Africa. Thus the land became known as zenj and saw the conversion of Africans to Islam in the proportions of places like West Africa.

This is evidenced by the overwhelming presence of African Muslims in Somalia.

There are also many African Muslims in Kenya, Tanzania and Mozambique.

Non Muslims were the victims of enslavement. It brought solace to the conscience of the enslavers because it was permitted in the Quran.

As was the case with polygamy, Muhammad did not author a guide to slavery but merely existed at a time that slavery was widespread.

He encouraged Muslims to regularly free slaves as an act of charity and to treat them well.

Freeing slaves along with praying, fasting and feeding the poor were also ways of showing repentance after sin.

The resultant effects of Muslims making such provisions for slavery were no different from Christians and Catholics in the West. They equally found it justifiable for humans to be enslaved as long as they did not partake of their religions.

The Remba are descendants of the Judaic Sabaeans of long ago. They brought with them to Zimbabwe the zenj concept which their ancestors took to Arabia.

To them the zenj were gentiles, or people not of their lineage who did not follow the laws and covenants between God (Mwari) and their ancestors.

The spread of Islam threatened and continues to threaten to dilute the identity of the Sabaeans with that of Muslims. Leading them to opt to move permanently into Africa and live amongst the zenj in a bid to prevent conversion.

They called the indigenous Africans va-shenji, a word similar to zenj and carrying the same meaning.

Their journeying far into the hinterland was to seek minerals like gold. However, their decision to settle permanently may have been to escape the threat of being converted or enslaved by Muslims along with other non Muslim Africans.

To this day, the Remba are considered zenj by the Muslims unless they convert to Islam.

Muslims were dominant in the known world (Africa and Asia) from the 8th Century CE to the 20th Century CE. First with the Moors, followed by the Ottomans and finally the rest of the Turks.

Even now, it is Islam which is the world dominant religion though it seems otherwise to most Christian colonies.

So if one’s eligibility or ineligibility to being enslaved was largely based on one’s religion, one can imagine the great extent non-Muslim Africans were enslaved during these thousand plus years of Muslim rule.

The Indian Ocean Slave Trade was in most cases less dehumanising than that of the Transatlantic. They treated slaves as property, could punish, kill, sell or rape at will.

An example is Bilal the African slave who Muhammad himself bought and freed from his masters because he refused to abandon his belief in God (Allah) despite being coerced and whipped by idolaters.

When a white skinned Turkish Muslim enslaves a non-Muslim dark-skinned African, it can’t only be the religion fuelling the prejudicing of the enslaved. There is the issue of race too.

After whites took over world dominance, the status of blacks around the world was reduced. This was greatly owed to the eugenics era, when racial sciences biased against blacks were taught.

To this day, Arabs, Indians and Latin Americans treat blacks as if they are not equal to them or whites. This was not the case in the past as noted at the beginning of this article.

Thus we find some Muslims, particularly Turks, ignoring the instructions of Prophet Muhammad.

Many were white Europeans before they became Muslim and migrated to Turkey owing to the Millet and Janissary systems of the Ottomans.

Turkey is the western most Asian nation and many whites settled there since the time of Roman and Byzantine rule.

The human trafficking, particularly of black women to nations like Kuwait to become sex slaves is more to do with their ethnic than their religious background.

Back then even the Moors considered Turkish Muslims unorthodox because they had retained Greco-Roman traits like harems (prostitute lounges) and idolatrous art that the Quran and Islam consider unlawful (haram).