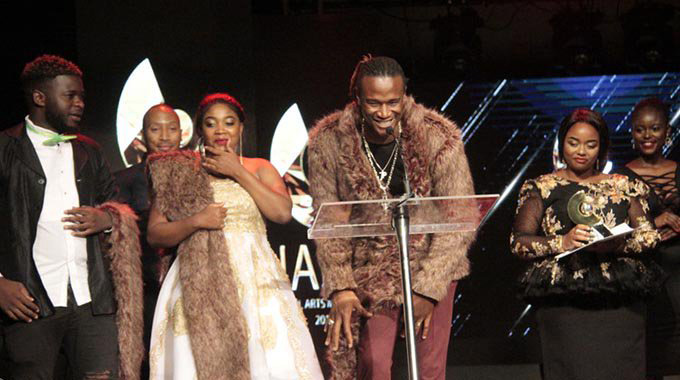 MAN-OF-THE-MOMENT, Mukudzei Mukombe, aka Jah Prayzah, has bagged more than a dozen accolades at the National Arts Merit Awards (NAMA) since 2014.
Speaking to Patriot Arts, his manager Keen Mushapaidze said the awards were confirmation of the huge amount of work the artiste and his team were putting in their music.
“In total, Jah Prayzah has 15 NAMAs, he has been a winner since 2014,” he said.
Mushapaidze said the Uzumba-born star, who has made a hard-to-ignore print on the music landscape, would continue to deliver to the best of his ability.
The just-ended 17th edition of the NAMA saw Jah Prayzah scooping almost all the awards in the categories he was nominated.
The artiste, who has been on the crest of the music wave for a while now, got the most awards at the ceremony.
Jah Prayzah’s romance with the NAMA can be traced back to the 12th edition when his track ‘Gochi Gochi’ catapulted him to stardom and was nominated in the outstanding song category.
But ‘Gochi Gochi’ could not stand the heat from the competition that included Sniper Storm’s ‘Love Yemusoja’ and Nox Guni’s ‘Ndinonyara’ that had also been nominated.
From then on, the then rising musician upped his game which saw him do a smash and grab at the 13th edition of the NAMA.
At this edition, he walked away with five accolades for the album Tsviriyo.
The album won in the Outstanding Song, Video-of-the-Year, Outstanding Male Musician, Album-of-the-Year and People’s Choice awards respectively.
However, there are some who feel the artiste did not deserve the gong for the Outstanding Song; many felt that dancehall musician Soul Jah Love’s ‘Pamamonya Ipapo’ deserved the accolade.
While questions may be raised, a fact that is beyond doubt is the amount of work Jah Prayzah put in his music.
From composition to videos, the musician, arguably, has been one of the most creative in the industry.
To widen his appeal, the musician has done collaborations with regional and international artistes.
Every album produced by Jah Prayzah since the 12th edition of the NAMA has carried a hit or two that have landed him a gong at the awards.
So brilliant has been the musician that he has become a subject for standup comedy; comedian Samantha Kureya, aka Gonyeti, even joked that musician Trevor Dongo, who had been nominated alongside Jah Prayzah, stood no chance of winning.
“Trevor nemucategory yauri iyi ucharohwa futi,” quipped Gonyeti.
Meanwhile, the 17th edition of the NAMA revealed that a number of artistes in the literary sector had submitted shoddy works.
The fault of the submissions lay not in the fact that they lacked depth, but that various production stages had been skipped.
For instance, writers did not employ professional editors and proofreaders.
According to National Arts Council of Zimbabwe (NACZ), organisers of NAMA, some of the works submitted did not meet the required standards.
“A high number of literary works are self-publications; these have numerous errors and unforgiveable grammatical and technical mistakes, thus affecting ultimate products as well as exposing writers’ glaring editing shortcomings.
“In some categories like Children’s Books, adjudicators noted some serious shortcomings in the editing, proofreading and general packaging of the books.
“In the three dimensional visual art work, adjudicators noted lack of creativity and originality in a number of entries,” reads the statement.
Clearly, local artistes must not compromise their work for the sake of getting them out but ensure that quality products are released.
And quality work stands a better chance of competing on the international platform.
While the move by the organisers might seem callous, it is necessary that we do not compromise on quality.
Launched by the NACZ in 2002, NAMA is one of the biggest awards ceremony in the country that celebrates and promotes the arts sector.
Special awards for the 17th edition include Winky D who won the People’s Choice award, Divine Assignment for Outstanding Promoter, Rooftop Promotions for Arts Service award and Phatisa Nyathi for Lifetime Achievement award.
Meanwhile, NACZ has opened for submissions for the 18th NAMA edition.