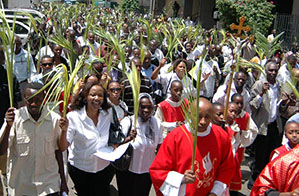 THIS week is the Easter period around the world.
It is one of the most important Christian festivals in honour of Jesus Christ’s resurrection three days after his crucifixion.
Last Sunday, along Beatrice Road in Harare, there was a Palm Sunday procession of people holding palms and walking in an orderly manner to commemorate Jesus’ last journey into Jerusalem.
Similar processions took place around the world.
In Latin America, some Christians cried as they carried an image of Christ along the streets of Lima in Peru.
The most common picture of Jesus is that of a European white man wearing a white gown.
He has long brown hair, straight nose and blue eyes.
The light shines from behind his back.
He looks calm and angelic.
Is this the true image of Jesus?
Reverend Dr Horace Wright, pastor of The Holy Qubtic Church in east London, argues in the paper called The Voice that Jesus was an African.
He says that there is a region in the Bible, where the indigenous people were of Nubian stock.
This is the place where Jesus was called Ya-Shu-a.
He was born here and this is where he also lived.
To support his argument, Dr Horace Wright presents Bible references of Christ as a Nubian black man.
In Revelations 1:13-15, there’s a description of ‘one like the son of man’, referring to Ya-Shu-a, who had hair “like lamb’s wool and feet like burnt brass.”
In Acts 13:1 Ya-Shu-a’s brother Barnabas and Simeon were called Niger which meant ‘black’.
We also know that the earliest known image of Jesus Christ as a black man is shown from the Coptic Museum in Cairo, Egypt.
Historically, Europeans dehumanised and subjugated the Africans through indoctrination by preaching that Jesus was a white man.
They introduced a version of Christianity and the ‘Holy Bible’ starting in the 17th century, spreading a new image of Jesus Christ as ‘white’.
These images were meant to force Africans to worship and serve a man who looks exactly like the white slave master.
This also served to propagate that Africans have no place in the Bible.
Africans were then convinced that this European Jesus was their saviour.
We know from the historical records that Christ was NOT white, but nobody can be 100 percent certain what exactly his exact ethnicity was.
The original Israelites often painted in a 1400 B.C.E., were also not pale white. But to speak that Jesus was black causes a lot of controversy not only among Europeans but among black people as well.
And yet, evidence dictated that Christ was definitely not ‘white’ and did not have blue eyes, contrary to the Euro-centric depictions.
By making Jesus white, Europeans erased Africans from Biblical world history. When Christianity and the white Jesus were presented to Africa, it was as if there was no history in Africa before the white man came.
But sifting through historical records, we find that Africans were already in America before Christopher Columbus got there.
Ivan Van Sertima, in his book titled, They Came Before Columbus shows that there is archeological evidence of trading between the Aztecs, Mayans and West African black African merchants.
Christopher Columbus wrote that he, “wanted to find out what the Indians of Hispaniola had told him, that they had come from the south and southeast.
Negro people who brought spear points made of a metal they called ‘guanin’ which was found to have 32 parts, eighteen of gold, six of silver, and eight of copper.”
Christian preachers promoted a new image of Christ beginning with Saints Peter and Paul, King Richard (the Lionheart) and the Crusaders, Columbus, Magellan, Joan of Arc and the missionaries.
Jesus was indeed a great, theological and philosophical man. Alongside him are other great men like Moses, Elijah, Gautama Buddha, Confucius, Lao Tze, Mohammed and others.
It is important to note that in Islamic culture there are no images of the Prophet Muhammad at all.
Unlike Christians, the Jewish Israelite people do not believe that Jesus was God. They believe in their original and religious traditions, the Judaic religion, which is adhered to by Abraham, Jacob, Moses, King David and King Solomon.
Equally important to note is that Christianity is just one religion that came to Africa and it was embraced without too much questioning.
But there are other important religions around the world such as such as Taoism, Buddhism, Islam, Hinduism, Judaism, existing alongside Christianity.
It should be noted that the process of bringing Jesus to Africa included, conquest, occupation, settlement, church buildings.
This was part of the Christian mission to propagate religion around the world. Today, the image of a white Jesus and Christian religion rules many Christian countries.
One reason for this belief in a white Jesus is that the black people have been taught to hate themselves through slavery and colonisation.
Today, there are many African homes with a picture of a white Jesus on the wall. Despite such evidence of Jesus as a black man, there are Africans who do not like to hear that Jesus might have been black.
Besides, if we speak of Christ as black, the result has potential to turn upside-down the entire spiritual beliefs of many Europeans and Africans.
At Easter time, let us remember that Jesus Christ descended from the tribe of Judah.
During his time, the issues of racial difference did not even exist prior to Europeans using various colour codes to create a societal hierarchy.
Ancient Egyptians never referred to one another as ‘black’ or ‘Arab’ or ‘white’. People were just people and the colour difference did not matter. People were judged solely by the content of their character in what we would say in Shona, hunhu hwavo.
This means there was no ‘race’ or ‘colour’ associated with people.
But, by dividing people into various shades, Europeans presented a divide and rule method.
To many who were marching for Jesus on Sunday, do take note that the white Christ they show in churches was never like that.