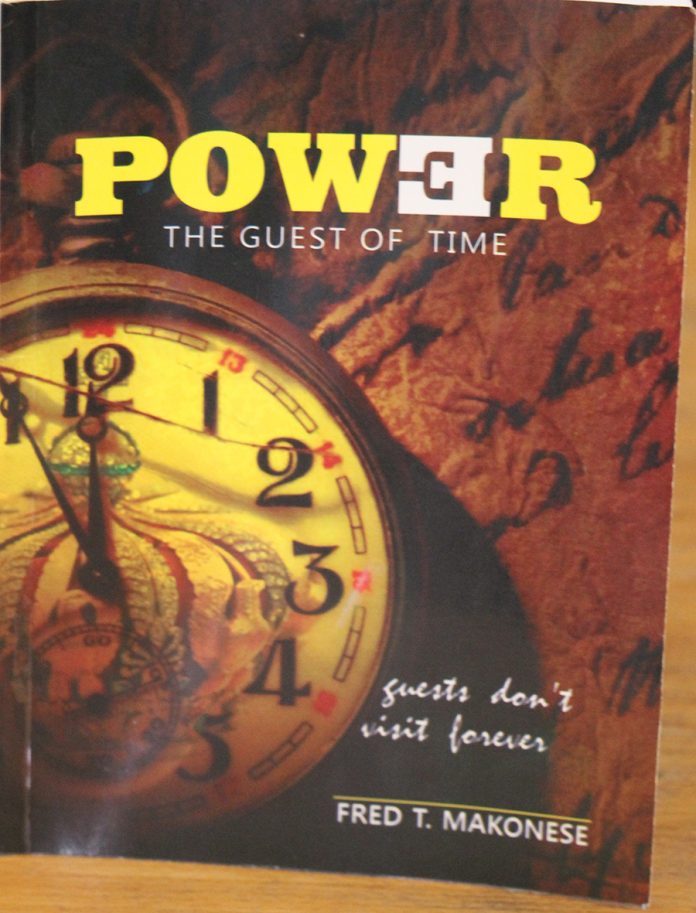 Power: The Guest of Time

Published by University of Zimbabwe Publication (2018)

His message was simple.

Be proud of your origins and identity.

No matter how hard one tries, none can change a person’s origins.

Through slavery and colonisation, whites have tried to manipulate blacks into disowning their origins.

African history and culture have been deemed inferior.

Sadly, some Africans have been hoodwinked.

They now think being ‘white’ is superior.

They shun their origins, resulting in alienation and their demise.

Just like Mtukudzi, who was on a drive to decolonise the minds of his audience, educationist-cum-writer Fred Makonese penned the book Power: The Guest of Time which aims to inculcate a sense of pride in Africans.

Power: The Guest of Time is an anthology of 26 poems.

In the poem ‘Man from Africa’, Makonese writes about how whites have made blacks feel inferior.

This was not by chance.

It was all part of a grand strategy to make blacks feel worthless.

Whites want Africans to hate their history and culture and once Africans lose their pride, they will not feel the need to defend their heritage.

“They call me primitive

Because to them I behave like a medieval native

Sticking to a culture they call retrogressive,” writes Makonese.

During colonisation, African traditions and value systems were labelled ‘ancient and demonic’.

Africans were forced to do away with their culture, but as the Shona adage goes: “Chinonzi regera ndechiri mumaoko chiri mumoyo unofa nacho,” Africans held on to their birthright.

“Culture, culture, what is culture?

Culture to me means identity

Culture is a way of life

Culture is a history

Culture is a birthright,” writes Makonese.

In the poem ‘I’m black and I’ve Passion’, Makonese writes about how blacks have remained committed to defending their heritage and birthright.

I’ve been cheated out of my God

And now ashamed to claim my own heritage

Ashamed to call the names of my forefathers,

My champions, in prayer

It’s easy to take anything from me

My name, my people, my god, my religion,

My home, my wealth, my essence

Despite efforts to strip blacks of their origins, Makonese notes that Africans have not lost the zeal and determination to protect themselves.

In the poem, ‘My Heritage’, the writer speaks on the land issue.

One of Africa’s major natural resource is the land.

From the land, Africans have practiced agriculture and mining.

As such, Makonese feels there is need to safeguard the land.

“On this land is my heritage

For everything heritable is deposited in its belly

And every spectacle on its face

It was the need to reclaim the land that had been taken away by whites that drove thousands of young men and women to take up arms against the colonial regime.

In the poem ‘On the Altar of Our Revolution’, the writer celebrates the gallant sons and daughters who sacrificed their lives to fight the Ian Smith regime.

Their efforts were not in vain as Zimbabwe attained its independence on April 18 1980.

Whose resolve for national cause reversed a historical disaster

Whose principles for the black man’s struggle need apprehension

Whose heroic roles in our fight for emancipation are beyond admonition

Whose Chimurenga names and history are memorable

As Zimbabweans continue to enjoy the fruits of independence, Makonese urges them to own their history and future.

In ‘Racially Harmony’, the writer speaks on how, in some instances, whites have tried to remove Africans from Africa’s story.

But because of my blackness

Now I compete to interpret my own self

They teach me to be racially conscious

As the saying goes: ‘The story of the hunt is told by the hunter and not the prey’, blacks should be on the forefront in narrating Africa’s story.

After all, Africa is the cradle of mankind.

We must tell our own stories.