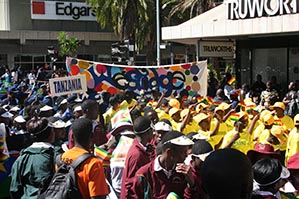 THE launch of the clean-up campaign in preparation for the Harare International Carnival scheduled for May 16 to 25 2014 could not go unnoticed with various stakeholders from different age groups coming to support the drive towards a clean city.
The carnival concept which began in Zimbabwe last year is a big money earner in countries such as Brazil, Nigeria and South Africa among others where the concept has been happening for many years. Carnival has roots in the pagan festival of Saturnalia, which, adapted to Catholicism became a farewell to good things in a season of religious discipline to practise repentance and prepare for Christ’s death and resurrection.
This carnival is also influenced by African-Brazilian culture.
It is a six-day party where crowds follow the trios elétricos (dance routine) through the city streets, dancing and singing.
The launch of the clean-up campaign then ahead of the carnival comes amid the rampant mushrooming of dumpsites across the city following the failure by the city council to timely collect refuse.
Harare has in the past been known for its cleanliness which is why it has been coined the ‘Sunshine City’.
The failure to provide timely service was as a result of many councils being financially incapacitated to do so while others were wrought with corruption.
Harare residents therefore resorted to a system of illegally dumping litter wherever they could to get rid of rubbish.
Efforts by environmental stakeholders such as the Environmental Management Agency (EMA), Miracle Missions and Environment Africa among others, to ensure that the environment is kept clean, have been numerous while awareness campaigns and advice to keep the environment clean has seemingly fallen on deaf ears.
The coming of the Harare International Carnival therefore needs to find the city clean so that it boosts economic growth.
The Zimbabwe Tourism Authority (ZTA) is currently funded by The Treasury to the tune of US$200 000 and has targeted US$5 billion by 2018.
Speaking during the launch of the clean-up campaign held in Harare recently, the Mayor of Harare, Benard Manyenyeni said his vision for Harare is to have the city flourish in a clean environment.
“Over 21 countries have confirmed participation at this year’s Harare International Carnival so there is need for a good image to be portrayed,” said Manyenyeni.
“My shared dream for Harare is for it to have healthy citizens and have the town flourish and so we must join hands for a sustainable city.”
ZTA board member, Marah Hativagone said the carnival was a time to market the country and so there is need to ensure that the city is clean.
“The onus rests upon all of us to work together to maintain the cleanliness of our city,” Hativagone said.
“The provision of bins, stiff penalties for those littering, timely collection of waste, public awareness programmes are needed to make sure we have a clean city.”
Africa Lotto’s marketing executive, Tarisai Chipamaunga said Africa Lotto’s participation in the clean-up campaign was as a result of the need for a clean environment.
“Everybody wants a clean environment and with most of our outlets in Harare we have partnered ZTA and the City of Harare to bring back the sunshine city status by helping clean up the environment which is why our logo says ‘ita uchinonga marara’.”
Sandra Gobvu the public relations officer for Environment Africa said the clean-up campaign by ZTA is a good initiative to help create a clean environment.
“Since 1993, we have been mobilising communities and supporting them clean up their environment,” she said.
“This year we are supporting communities with clean up packs and we feel that the initiative by ZTA is good as it sends a message that it is everyone’s responsibility to keep their environment clean.”
The ZTA’s Tessa Chikaponya said the clean- up campaign launch was so as to bring back the sunshine city status.
“ZTA and its various stakeholders that include the corporate world, churches and many others have partnered to clean up the city ahead of the Harare International Carnival so that we create a culture of cleanliness to bring back the sunshine city status,” Chikaponya said.
“Businesses thrive well in a clean environment hence the programme which will continue after the carnival.”
Zimbabwe Sunshine Group director, Ronnie Mbayisa revealed that the Mabvuku-based organisation whose 300 youths are involved in door-to-door campaigns of collecting litter are also taking part in the clean-up campaign.
“Our youths are involved in making recyclable artifacts from the litter that they pick in Mabvuku,” said Mbayisa.
“Although the 300 youths have not yet started selling their artifacts, we feel that this is a solution to the problem of waste.”
Clean and Green Miracle Missions’s Jacqueline Anderson also said her organisation says there is need to turn trash into cash by sustainably looking after the environment.
“We have been operating for four years doing clean ups, conducting training programmes for people to turn trash into cash,” she said.
“We also have a recycling plant from which we do bags, dustbins and water filters and this not only creates employment but, also an atmosphere of being environmentally sustainable.”
Various clean-up campaigns have been held following the official launch of the Harare International Carnival Clean Up aimed at building momentum towards the 2014 edition of the Harare International carnival.
It is also the intention of the ZTA and Harare City Council to ensure that the clean-up campaign is sustained before, during and after the carnival with the ultimate objective of Harare regaining its ‘Sunshine City’ status.