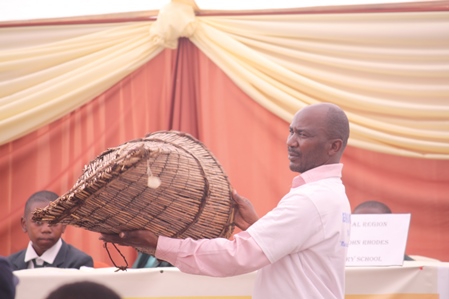 ZIMBABWE last week joined the rest of the world in commemorating International Museums Day.
The day which was set aside by the International Council of Museums in 1977 is meant to celebrate and recognise the role of museums in society.
As such on May 18, nations, communities, families and individuals worldwide converge at museums to celebrate the role they play in the creation of intercultural understanding, national development and world peace.
It is against this background that the National Museums and Monuments Zimbabwe (NMMZ) through its heritage education department runs vibrant heritage educational programmes throughout the country as a way of marketing museums and promoting enjoyment in learning about Zimbabwe’s cultural heritage for all age groups.
The Heritage Education Quiz conducts quiz competitions in all the country’s provinces culminating in a national final which is hosted on International Museums Day.
This year’s International Day of Museums commemorations was held at Queen Victoria Museum in Harare last week under the theme, ‘Museum Collections make Connections’.
In an interview, NMMZ executive director Dr Godfrey Mahachi said the theme seeks to reinforce the link museum business has with change and the potential museums have in forging partnerships from within the modern corporate ,social, economic and political world.
The quiz, he said, is a tool for creating awareness among schoolchildren and members of the public in rural and urban areas on Zimbabwe’s cultural heritage.
“The quiz focuses on the past, heritage, conservation, science and nature, the environment and general knowledge,” Mahachi said.
“In both regional and national finals all contestants have to identify museum objects (artefacts) and answer questions from all museum collections.
“The quiz provides children with an academic forum in which they compete just like in any other activity.
“It has created an awareness and appreciation of the cultural heritage of Zimbabwe in its diversity
“It provides both the children and the pupils with a new learning media which supports and consolidates the school curriculum, through interaction with museum objects.”
Dr Mahachi said the quiz is administered using the Ministry of Primary and Secondary Education administrative structures and through tapping into the ‘Better Schools Programme’ network.
He said so far, the programme had covered 96 percent of all schools in Zimbabwe, a remarkable achievement since its inception in 1993 where only 150 primary schools participated compared to 2013’s, 6 389 schools.
In a speech read on his behalf by his deputy, Prof Paul Mavhima, the Minister of Primary and Secondary Education, Cde Lazarus Dokora, said International Museums Day was important because it highlights the importance of teaching history, national heritage and the values that define Zimbabweans.
He said a nation can only ignore its history and heritage at its own peril.
“My Ministry is working on modalities to transform the educational curriculum in line with the Presidential Commission of Inquiry into Education and Training,” said Cde Dokora.
“In line with the recommendations made by that Commission, we are committed to strengthening the content of the History syllabus, cultural heritage and citizenship education in order to have a bright future for this nation.
“By including questions on our historic past, the conservation of our heritage, science, the environment, nature and general knowledge, the National Heritage Quiz provides an important forum for entertainment, information and education to the public while promoting national unity and diversity.”
Cde Dokora said the introduction of Early Childhood Development (ECD) modules A and B for four and five-year-olds respectively, was meant to strengthen the foundation of the education system through the institutionalisation of infants thus exposing infants to heritage, conservation, history, science and technological developments through age appropriate activities.
This year, five schools, Dudley Hall, Baring, Madyangove, Cecil John Rhodes and St Christopher Primary School participated at the national finals.
Each one represented one of the five administrative regions of NMMZ which are Northern, Southern, Eastern, Western and Central.
All the participants exhibited vast knowledge of Zimbabwe’s history in the tightly contested competition.
Dudley Hall from Norton came top, followed by St Christopher and Madyangove respectively.
However, ZANU PF director for gender and culture, Cde Gumisiro Dhliwayo said there was need for the competition to uphold the indigenous languages of this country as many pupils may fail to interpret the questions, particularly those from rural areas.
“We cannot not talk of our culture and fail to emphasise the issue of our language,” he said.
“Using a foreign language makes us lose our identity and zest.”
Cde Dhliwayo said schools with colonial names such as Cecil John Rhodes and Allan Wilson among others must be renamed.
He said maintaining such names is a continuation of colonisation.