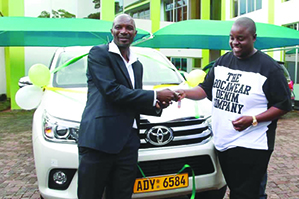 THE story of Wicknell Chivayo does not make good reading.
It is an uninspiring tale drawn out of the dark world of under-hand dealings whose outcome is the millions of dollars he constantly flaunts on social media, his favourite platform to launch unrestrained attacks on innocent people.
Until last week when he announced that he was no longer funding the Zimbabwe Senior National Soccer team, the Warriors, following the publication by The Sunday Mail of a story that he had not honoured some of the promises he made, Chivayo was a nuisance on social media.
He provided entertainment to many, more like the now forgotten Baba Jukwa who pestered people with his silly and widely discredited ramblings in the run-up to the historic July 31 2013 harmonised elections.
In the aftermath of his withdrawal, the transient Chivayo has sought to portray himself as a super-human being, pouring acerbic vitriol on journalists, Government officials like Professor Jonathan Moyo who proffered advice to the Zimbabwe Football Association (ZIFA) to the effect that the association needed to harness sponsorship from the corporate world, not from individuals who in turn hold the nation to ransom when it matters most.
Professor Moyo was threatened with expulsion from Government by Chivayo.
Really!
Zimbabweans have not been spared either from Chivayo’s diatribes.
“Muri katsi dzevanhu (you are all cats),” said Chivayo in one of his recent posts.
But as the Chivayo curse continues, so too does the Mighty Warriors phenomenal story.
It is the story of success born out of hard work and commitment, not of Chivayo’s making.
On Sunday, the legendary Mighty Warriors wrote another success story by qualifying for the African Women Cup of Nations.
In August they will be taking part in the Olympics to be held in Rio, Brazil.
They achieved all this without Chivayo’s ‘support’.
So for this misguided hefty fellow to insult people simply because he has funded the Warriors is completely out of order and unacceptable.
While we celebrate the success of the Mighty Warriors, we have to unravel Chivayo’s misdemeanors.
Chivayo is said to be the managing director of Intratek.
The reality though is that his handlers are a powerful Asian cartel, among them Ibrahim Yusuf who is the company’s executive chairman.
Yusuf just like his runner Chivayo is a controversial character.
In 2010 Yusuf stoked controversy in South Africa when the KwaZulu-Natal Health Department irregularly awarded a R4, 3million tender to Intratek Properties.
The tender was for the supply of 22 500 units of the controversial circumcision tool known as the ‘Tara Klamp’.
Yusuf reportedly became close to ANC leaders in exile in Zambia during the 1980s.
The then Health Minister Aaron Motsoaledi confirmed to Parliament that no tender was issued.
Motsoaledi explained that the KwaZulu-Natal health department did not issue a tender because only Intratek Properties could offer a better price than the Malaysian company that makes the devices – implying that the government could not have bought the devices anywhere else.
Intratek Properties is the sole distributor in Africa of the Malaysian-made plastic clamps, which are placed on the penis foreskin with the purpose of removing the foreskin after about seven days.
The ‘Tara Klamps’ had not been approved by the World Health Organisation (WHO) and have been criticised by both the Treatment Action Campaign and the Southern African HIV Clinicians Society.
An interesting twist were reports that Yusuf gave controversial King Goodwill Zwelithini a car worth R1 million.
The Zulu edition of the September 18 2011 The Sunday Times reported that Yusuf gave King Zwelithini a car worth R1 million.
Was it ‘A harmless gesture of respect, or payback?’ the paper asked.
Zwelithini’s utterances last year reportedly resulted in brutal attacks against foreigners living in South Africa.
With friends like these, who needs enemies Chivayo?
He can display public bravado, insult Zimbabweans and flaunt his wealth all he wants, but he cannot hide who he truly is.
Soon chickens will come home to roost.
You have touched a raw nerve by attacking Zimbabweans.
You don’t insult people and expect them to embrace you.
The Mighty Warriors have just proven that there is life and success without you.
Let those with ears listen.