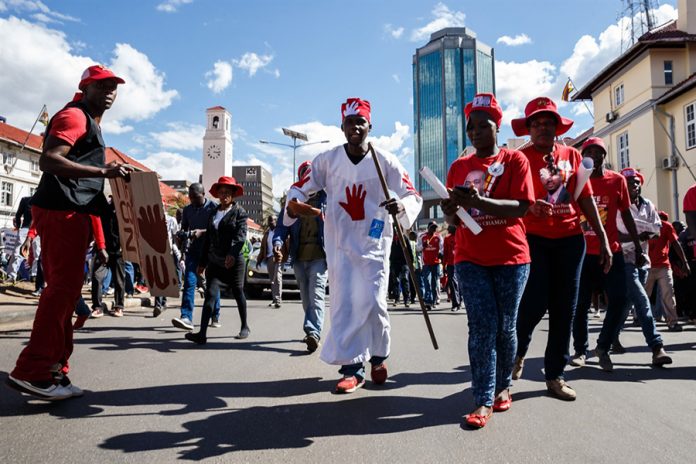 THE MDC Alliance, in collaboration with the US Government, has embarked on a fresh two-pronged plan to destabilise the country and bring it to the UN agenda with a view of sending a supposed ‘peacekeeping mission’ to Harare, this publication can reveal.

Information at hand shows that the plan involves launching sporadic but violent attacks in the country’s high density suburbs to galvanise the masses to rise against Government.

Insiders within the MDC Alliance told this publication that funding for the ‘Free Zimbabwe Campaign’ has been secured, with a senior party official working in cahoots with a former youth leader to set the project in motion.

The senior MDC Alliance official, famed for selling the illicit brew commonly referred to as ‘Bronco’, is said to be the holder of the purse for key party programmes and has an account in Namibia, a country he frequently visits.

But it is in Zimbabwe where real action, according to the US’ wishes, is supposed to be.

The US Government, on the other hand, is working round the clock to tarnish President Mnangagwa’s re-engagement efforts on the international scene through presenting Zimbabwe as a pariah state that has little regard for human rights.

The Government of Zimbabwe has been on an aggressive re-engagement drive that has seen SADC coming on board on Harare’s side against Western-sponsored economic sanctions.

The US, however, denies it has imposed sanctions on Zimbabwe, instead preferring to call them ‘restrictive’ or targeted measures.

Those denials have, since December 21 2001, armed the MDC Alliance with ammunition to accuse Government of failing to develop the economy and calling on its members to violently confront the authorities.

And the MDC has been consistent on the violence front, with a record that stretches as far back as 2002.

The violent confrontation plan was laid bare by MDC Alliance leader Nelson Chamisa during his party’s 20th anniversary on September 20 2019 at Rufaro Stadium.

On September 18 2019, the party’s standing committee held a meeting at Harvest House where it was agreed that the opposition party’s youths had to be more ‘militant’ in their demonstrations.

The MDC Alliance’s violent streak was also displayed during the January 14-16 2019 violent demonstrations where there was rampant looting of shops and burning of cars and property by the party’s marauding youths.

Speaking at Rufaro Stadium, Chamisa stated that his party would be taking the Government ‘head on’, a statement that drew wild cheers from his visibly intoxicated youths.

“What we are saying is, wait and see. We will not have our demonstrations banned,” he said.

“All progressive forces must converge; so we want teachers, students, workers, churches and political parties to come together and have a ‘free Zimbabwe campaign’.

Zimbabwe is facing critical power, fuel and water shortages, and a sharp rise in the cost of living, which is not matched by disposable income.

If we call for a demo, will you come?

We want to plan in such a way that we will not go home.

We want to do a sustainable demo until we achieve what we want. December is too far.”

The threats follow the courts’ decision to ban the MDC Alliance demonstrations on August 16 2019.

This was after security services detected that the opposition was planning to destroy property and burn service stations.

US Ambassador to Zimbabwe Brian Nichols was implicated as the brains behind the August 16 2019 failed demonstration.

The following is an August 18 2019 report by The Sunday Mail which exposed Nichols role in the failed demonstration:

In their engagement with Sikhala, the American diplomats urged the MDC to go ahead with the demonstrations until their demands were met. They assured him (Sikhala) that the US was watching the developments and would impose punitive measures should Government arrest or assault the protestors,’ said the sources.”

But the US has yet to give up on punishing Zimbabwe.

On October 1 2019, the US eEbassy in Harare proudly admitted to having curtailed the sale of Zimbabwe diamonds on the international market.

Curiously, the US cited ‘forced labour’ as the reason for the withholding of the diamonds.

“US Customs and Border Protection issued a Withhold Release Order for artisanal rough cut diamonds from Zimbabwe’s Marange diamonds fields on October 1 2019 due to evidence of forced labour, US law prohibits importation of goods made with forced labour.”

While the US saw sense, with hindsight, the damage had already been done and in future it might be difficult to sell those (diamonds) for very obvious reasons.

Both are drawn from the same template.

On March 17 2006, Tsvangirai’s MDC was beginning its two- day convention in Harare which would adopt a programme of further destabilising Zimbabwe.
Called ‘democratic resistance’ (DRC), the programme aimed to sabotage the country and throw it into anarchy.

From March 2006, right up to March 2007, Tsvangirai and his faction of the MDC embarked on a whirlwind tour of Zimbabwe’s cities, all the time making it clear this was a build- up to the mass action.

An indicator of the rising Western belief in the inevitable success of his (Chamisa) new strategy was a major prognosis published by Harvard’s African Policy Journal which projected the unseating of President Mugabe and ZANU PF as foregone, urging the West to urgently prepare for a post-Mugabe era.

It warned the US Government and other donors against being ‘caught flat-footed’ by this change, urging them to ‘start planning now for possible responses to a transition in Zimbabwe’.

A few years ago, Washington also bankrolled the disgraced Archbishop Pius Ncube’s repeated travels around the world, which had no financial implications to the local Catholic Church or the Vatican.

This was before they went public with their programme of destabilising Zimbabwe.

In its State Department report, Supporting Human Rights and Democracy: The US Record 2006, released in Washington DC on April 5 2007, the US proudly admitted to subverting President Mugabe’s Government and to supporting the opposition (MDC).

“To further strengthen pro-democracy elements, the US Government continues to support the efforts of the political opposition, the media, and civil society to create and defend democratic space and to support persons who criticise the Government (of President Mugabe).”

The report itemised the following US subversion strategies:

At the presentation of the study in Johannesburg (South Africa) in May 2006, Tony Hawkins, a former University of Zimbabwe Economics lecturer and advisory figure to most scenario-building models on Zimbabwe, underlined both his expectations and frustrations:

American funding was also visible in the now infamous ‘Christian Alliance’ of 2007.

The US also sponsored the creation and funding of community newspapers in urban townships, especially in Harare, Kwekwe, Gweru, Masvingo and Bulawayo, where opposition action was expected.

For rural areas, it sought to rely on its illegal broadcasts through its VOA Studio 7 station which came in to complement similar broadcasts from The Netherlands (Voice of the People) and from the UK (SW Radio).

The US Embassy funding of Church institutions and figures included that of the Christian Alliance headed by Bishop Kadenge and Archbishop Pius Ncube’s South African-based Solidarity Peace Trust.

While all these strategies have failed to work, Zimbabweans must always be armed with the knowledge that the West is after Zimbabwe’s resources.

That is why they want regime change.