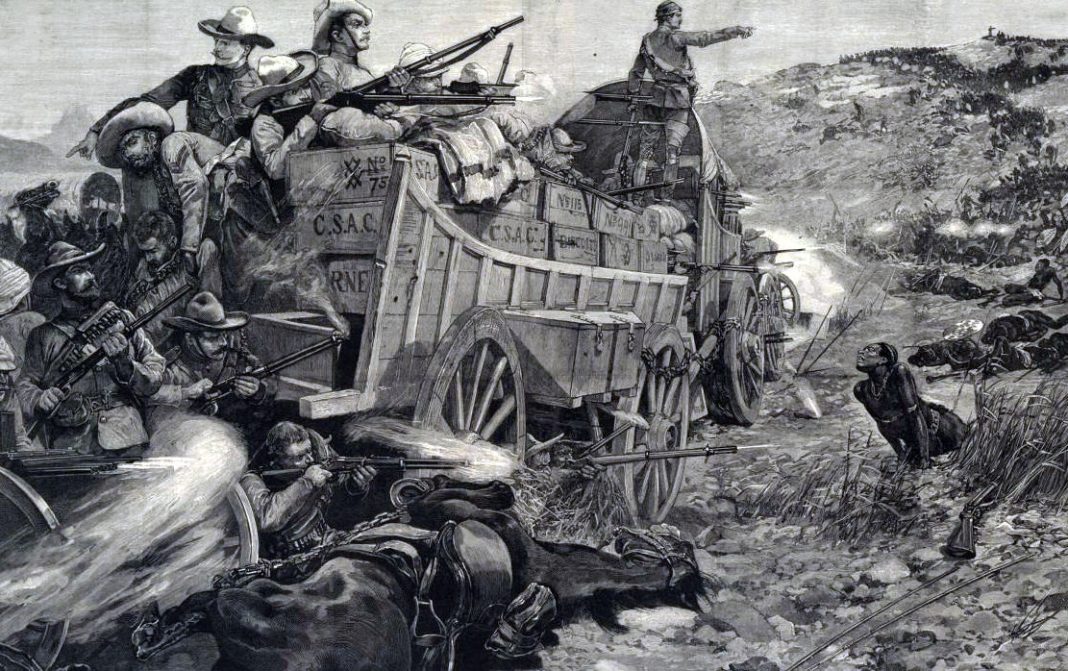 BY 1896, when the First Chimurenga erupted in Mashonaland, the British had dispossessed the Africans of eight million hectares of the best land leaving them in semi-arid, poor rainfall and disease-ridden areas.

The British were mining gold throughout the land.

They had reduced Africans to forced labourers in the land of their birth and they were using the so-called hut tax to steal cattle, goats and sheep from the Africans.

Although the battle for Mashonaland began in June 1896, preparations began as early as April when Mukwati, the high priest of Mwari at Ntabazikamambo shrine in Matabeleland reached out to the Shona, asking that there be appointed a spiritual counterpart for him for co-ordination of the prosecution of the First Chimurenga in the two regions.

This close co-operation is contrary to what has been popularised over the years; that the Ndebele and Shona were arch enemies.

They understood and accepted each other.

They knew they had a common destiny under Musikavanhu/Mwari/Mlimo.

He was based at paramount Chief Mashayamombe’s headquarters from where he worked with a war council consisting of warrior commanders seconded by paramount chiefs in Mashonaland.

Pursuant to Sekuru Kaguvi’s appointment as Mukwati’s counterpart, in May, a delegation consisting envoys of Mashayamombe, Tshiwa and Bonda, a spirit medium of the Rozvi chieftaincy, was sent to Matabeleland to consult with the leaders of the First Chimurenga.

They came back in June with a contingent of warriors from Ntini’s Ngoba regiment to assist in Mashonaland.

The contingent of Ndebele Chimurenga warriors was small, as this was after the arrival of British troops in Matabeleland which had forced most Ndebele warriors into the fortresses at Ntabazikamambo and Matopo Hills.

Immediately, mobilisation for the war to rid the land of the white menace began.

From mid-June 1896, the First Chimurenga raged in Mashonaland.

Salisbury districts, Chegutu, Hartley, Norton, Lomagundi, Mazowe and Mutoko, among other areas, reverberated with the anger of Chimurenga warriors as they attacked farms, mines, communication lines and ambushed the invaders throughout the land.

On these Chimurenga battles, they were accompanied by the Ndebele warriors.

It was a combined operation though the numbers of Ndebele warriors was quite small.

First Chimurenga regiments in Mashonaland were huge; a paramount chief could marshal as many as 4 000 warriors at a time.

They were armed with guns they had acquired through trade with the Portuguese although these were not as advanced.

It was to be so until July 23 when the British re-inforcements arrived and, only then, were the British armed robbers able to mount a counter-offensive.

The counter-offensive met with the fiercest resistance from Chimurenga warriors which Cecil John Rhodes’ forces and the reinforcements from Britain found it impossible to put out.

Chimurenga warriors were resolute and committed to end the whiteman’s existence in their land.

They had sufficient forces, guns and food reserves to last the onslaught against the whiteman.

Once the British armed robbers realised they could not defeat the Shona, they resorted to utter banditry.

The whiteman’s genocidal policy was to be executed as follows:

Spirit mediums and paramount chiefs to be shot on sight even if they had surrendered;

Villages had to be torched, crops slashed, grain and livestock looted so that the Shona would starve to death; defeating them militarily was elusive;

Indiscriminate use of weapons of mass destruction; the Maxim gun, Mountain gun, the 7 pounder and dynamite explosives.

In this manner whites proceeded, but the Shona were seasoned warriors who were committed to defending and reclaiming their heritage.

Villages were razed to the ground.

The whiteman’s intention was unmistakable.

He would wipe out all blacks unless they moved to the designated reserves, away from their rich fertile soils, to semi-arid disease infested ‘homelands; without their cattle and small livestock, without grain and away from their lucrative mines.

The whiteman sent them into the ‘desert’ without anything to survive on.

This was the pattern throughout the land.

However, the Shona fought on valiantly.

On August 3 1897, the invaders totally failed to dislodge Paramount Chief Makoni at his Gwindingwi fortress despite assaulting it with 7 pounders, Mountain guns, Maxim guns and dynamite.

Chief Makoni’s mettle represented that of the many other paramount chiefs.

When he was told to surrender unconditionally, as was expected of all those who had rebelled against the British, Chief Makoni was infuriated because he had never accepted that the British had power over him.

He vowed to fight the whiteman.

The whiteman retaliated by bombarding his Gwindingwi fortress for another eight days.

It was obvious the whiteman would wipe them all out; he had to save his people.

A kangaroo court martial was held.

He was condemned and executed.

When the whiteman attacked Gatsi fortress with artillery and dynamite, he failed dismally.

He remained in full control and with sufficient provisions.

In battle after battle, the whiteman was held back amid fierce fighting.

Paramount Chief Kunzvi-Nyandoro’s forces fought the whiteman fiercely for three days until they blew up his fortress with dynamite.

Chief Mashayamombe, one of the whiteman’s arch enemies fought them to the last.

After the British burned down his villages and slashed crops in the fields, he fought back, attacking the police observation post.

In retaliation, they came after him with 7 pounders, Maxim guns, dynamite charges, a battalion of mounted and foot soldiers as well as an artillery regiment.

On the third day, whites resorted to blowing up the entire Chena Hill complex.

It is in this final onslaught that Chief Mashayamombe was killed.

It’s battles like these and others which shocked the whiteman.

It was obvious to the whiteman that he could not win against the Shona at all and the solution was therefore genocide as Rhodes advocated and as the Catholics communicated through Fr Beihler of Chishawasha mission: “Our mode of fighting is not the correct one for the Mashona…It seems to me that the only way of doing anything at all with these natives is to starve them, destroy their lands and kill all that can be killed.”

Despite this genocidal policy and its utter ruthlessness, it was another year of fighting, of genocidal ruthlessness before the Shona retreated to fight another day as we later saw in the Second Chimurenga.