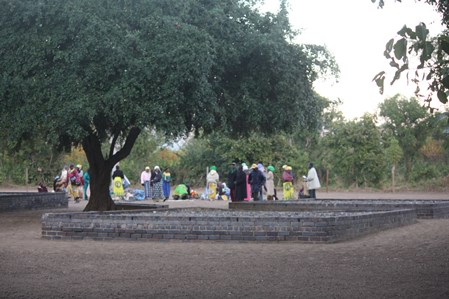 WHEN hundreds and hundreds of sons and daughters of the soil decided to cross the border for Tembwe Military Training Camp, Mozambique, they did not go through the border post like we did last week and many did not return to write about it like I am doing.
The journey to the camp last week organised by the Women’s League from Chegutu was a visit to celebrate the heroes who did not return.
More than 3 000 people lie in three mass graves at the camp.
And today the camp where hundreds received military training to dislodge colonial rule is a shrine.
We were told on November 27 in 1977, recruits as well as women and children were massacred in what is one of the most horrendous genocidal attacks by Rhodesian forces.
For four days Rhodesian bombers unceasingly and systematically dropped bombs on the camp in a manner that ensured that the sons and daughters of the soil would not return to a free Zimbabwe.
It is said first rescuers to reach the camp found a carpet of blackness.
The ‘black carpet’ was not that of mangled and torn bodies.
It was of vultures.
The stomachs of the vultures were distended, having gorged themselves on human flesh they could not fly off.
Some were vomiting.
I was visiting for the first time this place I have written about countless times.
Through the narrations of survivors of the massacre, Tembwe has become imprinted in my mind.
The horrific and brutal four-day bombing at Tembwe, had it not been for the olive branch extended by President Robert Mugabe at independence, would have seen the Rhodesian military and political leadership to the gallows without trial.
The journey that took us 17 hours by bus took days by recruits of the liberation struggle as many travelled by foot and took unconventional routes so as to avoid detection by the Rhodesian forces.
The Mozambicans; the police, soldiers and people made our trip memorable.
Posters of President Mugabe on the bus and the objective of our visit earned us first-class treatment.
Our bus at the Mozambican side of the border was given preferential treatment and along the way to Tembwe, officials and civilians would go out of their way to assist us to get to, in their words, the ‘brave fallen comrades of Zimbabwe’.
Finally we arrived at the shrine that is well-looked after by a Mozambican national, Thomas Sapezecca.
He immediately led us to the shrine, a kilometre away from his homestead.
We spent the night singing and dancing at the shrine which is made up of three mass graves.
Survivors Cde James Jambo and Cde de Gaul Njeru narrated the horrific attack.
“I woke up to a strange feeling that something terrible was going to happen,” said Cde Njeru.
According to Cde Njeru a Fish eagle had flown past the base uttering a strange cry.
The Fish eagle was a messenger of joy or sorrow depending on the sound it produced.
An hour later a spotter plane known as the ‘alumanya’ flew across Base One, he said.
It was the base where recruits were interrogated and later trained before they were taken to Base Two which was a transit camp to the front.
Cde Njeru said this was a sign of impending doom.
The spotter planes were usually followed by air raids.
After about 20 minutes, he said, the sky was filled with helicopters that dropped paratroopers on the eastern side of the camp.
The helicopters were followed by Hawks and Mirage jet Bombers.
“In no time the whole sky was filled with these ugly killing machines,” said Cde Njeru.
The first bomb, he said, as far as he can ascertain, fell at exactly 7am.
Cde Njeru had left the camp with a platoon of 360 recruits to collect tree bark to use in construction of grass-thatched barracks.
“I survived because we had left the camp to find construction materials for barracks for the ever expanding camp,” he said.
“We had gone 10 kilometres away from the camp, kusvuura miti yakawanda kudaro kwaizongwadza muvengi.
“Izvi zvakati tuma kuti tiende kunosvuura makavi kure.
“When we heard the sounds we were shocked, the sound of bombs could not be mistaken with anything, we helplessly watched the slaughter from a distance.”
Cde Njeru said they could not render assistance as they were not armed.
They sought refuge in the surrounding villages.
The bombings lasted for four days.
The Rhodesians decimated the camp.
After 10 days, Cde Njeru and his battalion headed for the gathering point which was in Chari Mountain.
The survivors were few, many had died.
“We arranged to go and bury our fallen comrades and to assist the injured in any way we could,” said Cde Njeru.
They found hundreds of vultures feasting on the dead.
“Wainhonga gumbo uko ruoko kwarwo musoro kwawo,” he said. “Mimwe mitumbi yakanga yatoputika.”
Cde Njeru said they only managed to dig small graves with hoes before the arrival of a bulldozer from Tete.
On July 8 1977, the bulldozer completed the job by digging three mass graves where more than 3 000 ZANLA recruits were buried.
Supezecca, the Mozambican national who currently maintains the shrine said he will live to remember the day.
He was 11-years-old when Tembwe was bombed and his parents perished in the attack.
“They had gone to fetch water from the river,” he said.
To date he believes his parents are buried in one of the mass graves.