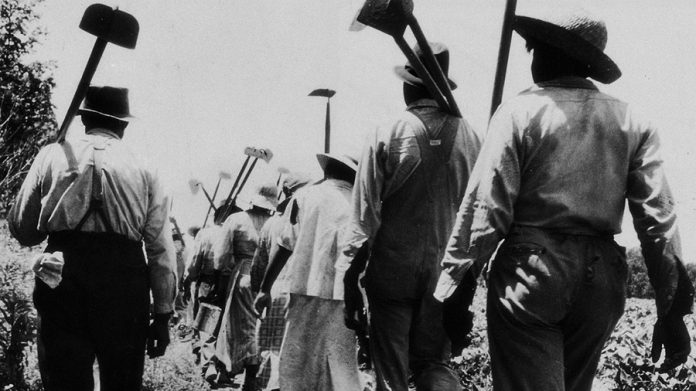 UPON arrival in America, the dehumanisation of slaves did not end but continued through appalling living conditions.

The already hurting and psychologically traumatised individuals, whose family units had been destroyed during the raids and sales were poorly sheltered; did not have enough basic conditions of living and suffered due to excessive work, brutal punishment, restrictions.

Their cultural beliefs were eroded due to new religious practices they were introduced to.

The slaves stayed in cabins, which were dilapidated, windowless and earth floors.

According to Murray (1971): “One Mississippi planter made his 150 Negroes live in twenty-four huts each measuring 16 feet by 14 feet, sleeping on beds made of straw with old rags thrown down in the corners and boxed with boards.”

Those with ‘better’ bedding slept on mattresses of corn husks.

They covered themselves with a single blanket, even in extreme weather conditions.

There was no proper medication for slaves.

The slave masters thought that poor diet would actually keep the slaves from committing crime.

Monthly rations of food consisted of eight pounds of pork or equivalent in fish, and one bushel of corn meal.

Reverend Henson says: “The principal food of those on the plantation consisted of cornmeal and salt herrings with a little buttermilk and the vegetables they grew.”

On most of the plantations, the slaves stretched out their rations with discards from their masters’ gardens and kitchens.

They kept hens and improved their diet with catfish, coons, possums and rabbits they caught.

Women slaves were very much encouraged by their masters to fall pregnant in return for rewards and extra rations after giving birth.

According to Frederick Douglas, slave children went about naked or covered with a bag that had holes cut out for the head and arms, or wore a single woollen blanket.

Work on the plantations commenced from dawn to dusk.

On moonlit nights, the slaves were kept longer on the fields.

They were supervised by cruel overseers who drove them mercilessly on the fields.

The tasks on the plantations ranged from routine jobs like bush clearing, splitting rails, mending fences and fertilising the soil — tasks which were performed all year round.

In South America, the slaves spent most of the time cultivating and harvesting crops.

Each slave was given a large basket and two coarse bags the size of a pillow.

They left the baskets at the end of the lines of plants, plucked and filled the bags with wool and then emptied them into the baskets.

By nightfall, the baskets would have been filled and carried off to be weighed at a central depot.

The overseer met all labourers at the scales, with a lamp, slate and whip; the latter to be used on those whose work was considered to be unsatisfactory.

Other slaves cultivated the vegetable gardens, or attended to livestock.

The old slaves cooked, laundered, mended clothes, cleaned up the yards and the stables.

Large numbers of slaves were hired out by their masters to work on neighbouring estates, which was profitable for slave owners.

Slaves looked after their owners’ properties, families, grew food for southern troops and constructed fortifications when war broke out in the South.

Others were miners, road makers and the most ‘fortunate’ were employed as deck hands on the river boats, going up and down the Mississippi River.

Planters had a habit of keeping black and coloured mistresses on their plantations for sexual gratification.

These women were ill-treated by their masters’ wives due to aroused jealous.

They were unfortunate women caught between the passions of their masters and mistresses, each armed alike with power to oppress and torture them.

Therefore, all slave women, black and those of mixed blood, lived in constant fear and uncertainty, because they could not refuse the whitemen who took to them in the bushes and barns.

Any attempt to refuse was liable to whipping penalty.

As such, a new race of men was born and bred in servitude in South America.

Slavery in America did not spare children.

A rude awakening to blackness came to children at eight or nine years in nearly all households in the South.

This was during the time the white and black children parted ways as their more fortunate companions started school and ceased to associate with their swarthy comrades.

It also marked the beginning of the poor black children wandering untended while parents worked on the plantations.

These children also performed light jobs on the plantations.

Frederick Douglas gives an account of how he drove up the cows in the evenings, kept the fowls, cleaned the front yard and ran errands.

When they reached the age of 18, children of the slaves became prime fieldhands and undertook the heavy work of the open-air factory.

Some had their ears burnt with a hot iron.

Mary Reynolds explains how men and women in the stocks were tied down with screws and cruelly beaten by overseers with whips that cut the flesh to the bone.

Some of the slaves never walked again after this ordeal.

‘Lesser’ punishments comprised reduced rations, exclusion from field dances on Saturday nights, jailing, the stocks, demotion of domestics to the field, arm and ankle chains as well as riveting on of iron collars.

Horrifying punishment included dragging a live cat on the ‘miscreant’s’ back.

For cases like damaging a wagon, one would get as many as 80 lashes at four-hour intervals.

Such treatment was meant to render indeterminate the boundary between human and animal and weaken the slaves’ entitlement under humanity.

Formal education was discouraged on the plantations.

“Any person that teaches a person of colour, slave or free or each offence to read or write, or causes such a person to be taught, is subjected to a fine of 30 dollars for each offence; and every person of colour who keeps a school to teach reading and writing, is subject to a fine of thirty dollars, or to be imprisoned for ten days and whipped thirty-nine lashes,” writes John Murray in The Slave Trade.

Educational prohibitions were relaxed towards the end of the slave era in the United States.

However, education became a systematic indoctrination and alienation from the slaves’ cultures and heritages

This is because English became the medium through which the world was perceived; resulting in psychological conflicts within individuals as they attempted to integrate their tradition with Western ideas.

The slaves attempted to disseminate information in their ethnic languages as part of their resistance efforts.

But the slaves were forced to adopt their masters’ religion, Christianity.

On Sundays, which were the slaves’ resting days, they dressed in clothes given them by their masters or which had been obtained by bartering vegetables.

Religion influenced slaves to be docile by telling them to render to Caesar what belonged to Caesar.

The slaves were taught that disobeying their masters was akin to quarrelling with God.

“Consider that it is not yourselves, it is not the people you belong to, but it is the will of God, who hath by his providence made you servants, because no doubt He knew that conditions would be best for you in this world, and help you better towards Heaven if you would but do your duty in it.

So that any discontent at not being free, or rich, or great, is quarrelling with your heavenly Master and finding fault with God Himself,” writes Murray.

The Americans never thought of Negroes as human beings and gave themselves god-like supremacy over them.

The Church developed a child-like dependency in the slaves.

According to Elkins, the slaves possessed totality of submission and accepted this infantilisation.

Mainstream or colonial texts accused blacks of being negligent, unreliable, indolent, timid, child is, given to exaggeration, giggling when they are together like infants and loyal or looking up to their masters as father symbols.

The slaves practised self-mutilation and deliberate amputation, to resist working for the slave masters.

They were to be moved about at the producer’s will.

It is strange that the Christian doctrines, in the US, which taught equality and brotherhood should have allowed slave owners to condone such cruelty, inequality and servitude.

Even the seemingly soft-hearted master with lamb-like disposition was capable of tiger-like fierceness.

Escape was made difficult by a reward system and pass laws which were enforced by armed parties of planters who patrolled the South with ‘nigger dogs.’

The Americans intended to derive maximum profit from slaves by denying the slaves their identity, their culture and their worldview.

According to Henry Louis Gates, the slaves were violated, segregated, robbed of their voice and identity as well as stereotyped and restricted

The slave trade tale is a reality of dualism as represented in the epilogue of Invisible Man.

The historical experiences of slavery speak to the emancipated or modern black man’s challenges with racism and dehumanising systems that seek to relegate blackness to second class citizenship,” said Gates Jr.