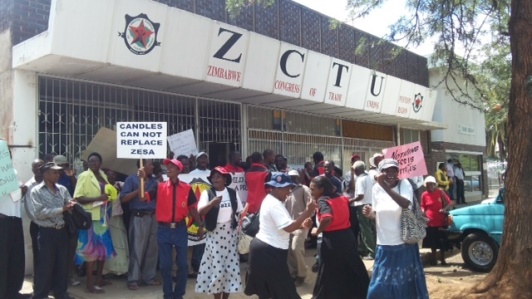 THE marriage of convenience between the labour movement and politics will haunt Zimbabwe for many years.
Founded on the desire to see ordinary workers represented fully and speaking with an audible voice with the employer, the unions have played an important role in defending the vulnerable.
But the importance of that role came under close scrutiny since the formation of the MDC.
It was in 1999 when the Zimbabwe Congress of Trade Unions (ZCTU) consciously took steps towards the graveyard.
It was when the labour movement gave its blessing to the rise of Morgan Tsvangirai and the MDC.
That decision influenced a lot of dynamics into how our politics would go, but surely most workers did not realise that they were sealing their fate.
The blessing which the ZCTU gave to the formation of the MDC would live not only to haunt the millions of ordinary workers, but ensure that they would be marginalised.
It was the ZCTU that constantly told the workers that the MDC and Tsvangirai were the ‘Messiahs’ that were bringing forth glad tidings.
The people were made to support a project that would eventually turn against them.
Far from being the marriage which would usher them into a new era, one day the workers of Zimbabwe woke up to a harsh reality.
Suddenly, the companies where they worked were talking retrenchments, closures and layoffs.
Morgan Tsvangirai and the MDC were mobilising the West to turn on the screws on the economy.
It took the ZCTU in connivance with the MDC and those external elements to send the worker down a total precipice.
Driven from the unproductive factories, they had nowhere to turn to.
The analysis of the matter has certainly revealed that maybe the ZCTU never envisaged that its support for Morgan Tsvangirai and his allies would take their constituency this far.
The so-called Messiah that the labour movement had blessed was suddenly the master of a “revolution that would devour its own children.”
Down went the industries, down went the country’s productivity, and down went the economy which was a jewel and envy of many.
But it was the despair which the workers who suddenly found themselves without jobs that got many thinking.
Did the ZCTU really represent workers?
Did the union believe sincerely in speaking on behalf of the voiceless?
Left on their own vices with no jobs to turn to, it has certainly dawned on many that the ZCTU sold out.
It was a cruel sellout technique which has left deep scars that will never heal for many until death.
The ZCTU-MDC marriage ceremony which many attended has turned out to be an event they should have shunned at all costs.
Now those men and women who constituted an important labour force in a glaringly growing economy are now left on their own.
With nobody to turn to, they have had to literally scrounge for a living.
Meanwhile, those at Harvest and Chester Houses live like kings and queens.
Most have found their way to our parliament and claimed ministerial privileges during the Government of National Unity.
They have bought properties in lush suburbs and created beautiful feathers around themselves.
They now claim a stake in being part of Zimbabwe’s political elite.
While this is happening, the workers have no-one to turn to or blame for having destroyed their livelihoods.
Perhaps what should be an eye opener to the thousands who once had jobs and stable incomes is the ZCTU May Day message this year; the tired threat of mass actions.
As they seek to eke out a living, most of them went into the informal sector.
The realisation by government that these helpless men and women needed support became an important pillar of seeking not only to rebuild the economy, but also to involve them in that exercise.
The recognition given to the informal sector has sent shivers down the spine of the ZCTU-MDC marriage. Government is clear that there is need to redeem the once formally employed men and women who are now self-employed.
Government also says they must be supported and has suggested harvesting tax for the fiscus from them.
The marriage however came out with guns blazing on May Day saying the move is not correct.
However the former workers are not fooled and neither is the majority of all Zimbabweans.
The ZCTU tried to play a political game again for Morgan Tsvangirai.
It will not work because Zimbabweans have realised the importance of safeguarding what they have.
Once bitten twice shy, all those millions in the informal sector will not give heed to any of ZCTU messages veiled in the solidarity conundrum, but containing a tired MDC manifesto.
The era of destroying livelihoods to gain political mileage is gone.
The people’s eyes are wide open.
They have heard and they have seen.
Rejecting the MDC on July 31 2013 was just a natural and sober reaction to the harvest of thorns directly cascading from that cruel marriage.