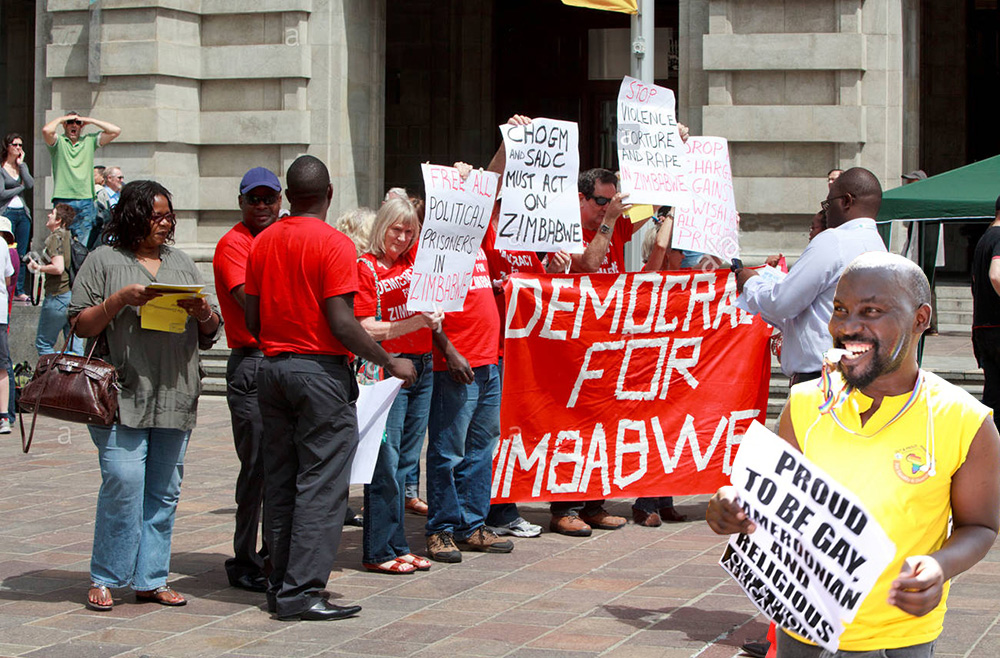 SOMETHING big happened in China on June 3 1989.

Deng Xiao-ping, the leader of China, ordered that Tiananmen Square be cleared of demonstrators led by students who had occupied the Square for several weeks.

Humphrey Hawksley, a BBC journalist and writer of Democracy Kills, estimates that about 800 civilians and 50 security personnel were killed in the clashes that followed.

The West responded by imposing sanctions on China but, more importantly, the Chinese Government succeeded in stemming a Western-inspired campaign to ‘democratise’ China following the collapse of communism in the former United Soviet Socialist Republics (USSR).

Analysts believe that, had China somehow succeeded in negotiating with the students to clear from Tiananmen Square in 1989, the problem of street demonstrations would have quickly taken a turn for the worse and, by 1990, China would have had to kill many people than they did at Tiananmen in order to survive as a country.

Worse still, had the democracy campaigners succeeded, the Chinese state would have probably collapsed and the country would have lapsed into a deadly civil war which, probably, would have turned China into a client state of the US.

The big lesson for us is that Deng’s decision to sacrifice the lives of about 900 people at Tiananmen Square was the basis for the China we know today.

Decisions of such a rare nature, in Africa, would be explained as inspired by Chinese ancestors.

Unnecessary detractions from the objective by citizens and outsiders in the name of democracy, human rights and good governance, was not to be tolerated.

By the mid-1990s, China was experiencing a boom in terms of infrastructural development.

Twenty years after the sad scenes of Tiananmen Square, China had become a model of poverty alleviation and ‘the economic engine the world depends on’.

The economies of Europe, Asia, Africa and the American sub-continent now look to Chinese investments for their economic development.

The major reason China attained high levels of economic development in a relatively short period of time is because it is not a democracy in the Western sense of holding multi-party elections on a regular basis.

China does not entertain Western-sponsored institutions such as regime change NGOs.

Neither does China tolerate kudira jecha of any kind by its citizens in the name of democracy and personal freedoms.

It should, however, be noted that since China became a rich country, it is slowly relaxing its stance on individual freedoms.

There is now a very vocal middle class in China; there are radio and television chat shows on which people express themselves freely without fear of recrimination by the State; the nationals engage in investigative journalism into corruption and other crimes the results of which lead to prosecution and/or censure.

In fact, Chinese citizens today enjoy most personal freedoms that democracies of the West provide, except, of course, voting in multi-party elections.

The other notable countries which have attained rapid economic development are Singapore, Vietnam, Taiwan, Cuba, Malaysia, United Arab Emirates and Kuwait, to mention a few.

They started by limiting their people’s individual freedoms and redirected the energies of their people towards achieving economic development.

Just like what happened in China, once the levels of poverty go down, citizens develop more confidence in their government; there is increased stability; more development takes place; individual freedoms increase and most citizens engage in more productive endeavours as opposed to engaging in sponsored disruptive behaviour for a few pieces of silver.

Compare the above-mentioned countries with India which is often touted as the biggest democracy in the world.

While it has achieved significant levels of economic and scientific development, India has failed to attain the high levels of poverty reduction that China achieved in two decades.

Some of the poorest people on earth are still found in India and, in terms of poverty alleviation, India may never catch up with China and the other ‘undemocratic’ nations highlighted above.

The point we are making here is, it is time for Africa, Zimbabwe included, to have a second look at the practice of democracy with a view to seeking more potent strategies of achieving high levels of economic development and poverty reduction because these are better human rights than the freedom to insult the president of the country or ‘enjoying’ the freedom to be gay.

Fifty years of independence and democracy have failed to develop Africa.

While Western critics have blamed mismanagement and corruption as the reason for Africa’s failure to develop, we totally reject this racist insinuation as it implies that Africans, by nature, are corrupt and poor managers.

Democracy is the enemy of development in Africa.

Ours is a subverted form of democracy which was fashioned for us by our former colonisers to create conditions for them to determine who, at any one point in time, governs the resource-rich countries of Africa.

The West is not genuine about democracy as noted in Gaza, when Hamas won the election and virtually all Western governments refused to recognise the Hamas Government.

We are wrong to trust the West as they sell the refashioned democracy to us.

But what we forget is the fact that the West is addicted to our natural resources.

During the slave trade period, the West used our black free labour to transform their countries into the richest countries on earth.

When the slave trade became unsustainable, they colonised us to intensify slavery and the exploitation of our natural resources for the benefit of their countries.

Post-independence, the democracy they force us to practise is the modern form of slavery that keeps us underdeveloped.

Let’s take Zimbabwe as an example.

We have an opposition party, the MDC, which was formed by the British Government in 1999 for the sole purpose of removing ZANU PF from power for taking land from white farmers whose ancestors had stolen it from our own.

The MDC was not formed to enhance democracy as practised in the West.

The opposition party, which is openly funded by the West to promote anarchy and resistance to Government programmes, also engages in an annual ritual of sending lobbyists to Washington DC to campaign for the renewal of sanctions against the country.

The West has also deployed an army of regime change NGOs which is increasingly and openly becoming the foot soldiers of mayhem and hooliganism designed to take the ruling Party out of power, as witnessed in the month of January instant.

In addition, the West has set up parallel structures in the media, legal, educational, spiritual, political and social sectors of our systems to undermine the ZANU PF Government. Above all, the West has not made it a secret that their intention is to remove ZANU PF from power using these parallel structures whose sole objective is to promote the regime change agenda by undermining Government.

In every election, since 1999, regime change NGOs have rigged elections in favour of the MDC by registering non-resident pro-MDC voters in selected constituencies to ensure a win in the targeted constituency.

In view of this development, elections in our country should not be viewed as a democratic practice, but a practice which has been hijacked to achieve regime change against ZANU PF.

We should, therefore, view elections as the single most serious threat to the country’s security and participate in these elections from that understanding.

Holding this view is necessary because the country’s stability in the future and our ability to make any meaningful economic development will depend on the West’s continued inability to succeed in its evil designs for the country’s elections.

We have ample evidence that the West has been rigging our elections since 2000.

In the 2013 election, for example, regime change NGOs registered over 200 people in Marondera Ward One Urban as resident at a church when, in fact, no one stayed at the church. House owners in the same constituency also discovered that people with strange names appeared in the voters roll as resident at their houses when in fact they were not.

Many people were also registered as resident in two blocks of flats in the same Marondera constituency when, in fact, the flats were empty as they had been closed by Government in 2003 as being ‘not fit for human habitation’.

Also in the same election, Okay Machisa, the leader of ZimRights and four of his officers were arrested for reproducing several copies of voter registration certificates.

In the same election in Sakubva, a focal person of Youth Initiative for Democracy (YIDEZ) was arrested for trying to register 18 people in the constituency outside the official procedures while a Mr Madhuku was found with a fake voters’ roll for Chipinge South constituency.

All these are rigging strategies which the West employs in every election and, through such deception, one day the MDC will win.

When that bad day comes, the US and Britain will rush to the United Nations Security Council to demand that ZANU PF hands over power to the MDC or else…

In democracy, if one loses an election, one is expected to accept the result, whether rigged or not.

So, once ZANU PF loses an election, like it almost did in March 2008, not even its closest allies in the region nor its international friends such as China and Russia will support it on the grounds that the election was rigged because, in democracy, losers are expected to accept defeat. Period!

A political system like ours, which allows hundreds of institutions that are created and funded by enemy governments to operate freely among its people, is clearly set up to fail.

There are too many divergent interests competing together in our system of Government and yet it has been proved that fast economic development depends on stability and unity and that is what ‘benevolent dictatorships’ provide.

This is also the lesson that President Emmerson Mnangagwa learnt on his recent visit to the UAE when he observed: “It (the visit) is an eye opener that if people are united and have vision, they can create institutions and infrastructure of this nature.”

It is also the same lesson that guided China, Vietnam, Malaysia, Kuwait, Taiwan, Singapore, the UAE and Cuba. They initially denied their people those freedoms that were judged to be anti-stability and, therefore, anti-unity.

The stability that was maintained over time allowed governments to plan and execute development projects that quickly raised the gross domestic product (GDP) of their economies to above US$5 000, at which point some democratic freedoms can be considered.

In Africa, Rwanda is emerging as a champion of poverty reduction and economic development.

A close examination of the factors that have enabled Rwanda to achieve these successes reveals that it is President Paul Kagame’s no-nonsense firm hand which brought about the stability and unity that drives development.

While Africa needs to work towards a democratic future, the continent needs to realise that the road to that point involves necessary repression of some individual freedoms to create the right environment that builds institutions of governance that are above elections; an environment that fosters poverty eradication, education and infrastructural development.

We also need to appreciate that, for democracy to make sense, institutions have to be put in place for the population to be educated on what it means.

Democracy in the hands of an unschooled population is a liability and can be a dangerous instrument as our highly infiltrated elections have demonstrated time-and-again.

Good leadership is not necessarily democratic leadership, but one that seeks to achieve good governance through poverty reduction and raising the quality of life for everyone.