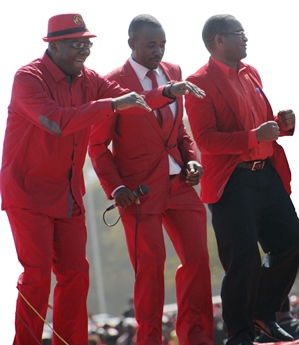 WHEN the nationalist forces fought to dislodge Rhodesian fascism, they had known and defined the Zimbabwe we wanted.
So today, when you hear people arguing about the difficulty to create a shared national vision, you get depressed because they think they are talking about something new.
For example, guerrilla training was double-pronged consisting of military and political education.
I remember the political lessons in the evenings after the forced-marches through jungle in the adjacent Morogoro National Park in Tanzania.
We were fighting for more than merely dislodging the whiteman from power and restore the blackman’s dignity that had been trampled on; we were fighting to get our land back, to control our destiny.
And during the evenings in the villages at the height of the war, the pungwe assumed a colossal educational and inspirational role.
Because it was built around music, the villagers gathered and sang with the comrades; singing songs that told their painful story, how they were left with no choice except this, and the political lessons from the camps always ended with an angry and glaring message: we were fighting for our land.
The villagers understood the message easily.
There was a shared understanding in those interactions towards a Zimbabwe we wanted, but there would be difficulties along the way.
But then some of the difficulties were entirely of our own making.
Such as forgetting that the Zimbabwe we want could only be built by a Zimbabwean who shared the same vision.
Perhaps the biggest mistake and ultimately threat to Zimbabwe’s revolution was failure to re-align and re-design our education to produce the Zimbabwean we wanted.
It is astonishing how little we regard education in creating the mindset.
More than 30 years after independence, our education curriculum is still fundamentally British.
We should not be surprised our college and school leavers want to jump onto the next available plane to London.
And strangely, this is the same person we expected to build the Zimbabwe that we want.
If the Cubans had not moulded the person they wanted to defend their revolution, it wouldn’t have survived this far, 50 kilometres away from the USA.
If the Chinese had not deliberately designed an education curriculum that produced defenders of their revolution, they wouldn’t be number one in the world in five years.
Tendai Biti, Nelson Chamisa, Douglas Mwonzora, Tafadzwa Musekiwa are classic examples of our education system’s colossal failure.
Because they opted not to go to London, they think they are right to stand up and condemn the struggle that brought them freedom.
Wasn’t it their leader, Morgan Tsvangirai, who dared us to return the country to the whites and see if they too, cannot fight to free it?
Our education system is producing people who don’t mind going under the yoke of British colonialism once again.
It is astonishing how we have disregarded such a development.
It is astonishing how during the GNU we didn’t mind giving away such a strategic ministry to David Coltart, a Rhodesian.
In the four years that he was minister, he secured millions from the West and flooded our schools with ‘free books’ from Europe and America about Europeans and Americans; their values and way of life.
It has been increasingly argued the Nziramasanga Report on education is not capable of producing the sort Zimbabwean we want; someone who can be counted on to defend the Land Reform Programme, someone who will not, in times of difficulties, surrender his birthright for 30 pieces of silver.
If Comrade Lazarus Dokora does not ensure that at the end of his ministry’s production line we do not produce someone who wants to escape to America, someone who would rather herd cattle in Botswana so that he is also in the Diaspora, then he would have failed like all the others before him.
The Zimbabwe that we want cannot be produced in bits and pieces, in puffs and huffs; it requires a holistic approach.
But there are also challenges caused by external forces, especially our former colonisers, to frustrate our effort to develop a shared vision and build the Zimbabwe that we want because a Zimbabwe that we want is not in their interest.
The formation of the MDC was part of the strategy to frustrate our efforts so that when we say the idea to form the MDC was mooted at Chatham House in London in 1999 at a meeting chaired by British foreign policy strategist, Richard Dowden, and Tendai Biti denies it, it shows how ignorant he is about international politics.
That is why Bishop Manhanga’s ‘The Zimbabwe We Want’ project a few years ago quickly ran into problems.
It was a loose coalition of people including even those representing the interests of our former colonisers.
But the road towards the Zimbabwe that we want has an interesting spiritual twist.
An American political analyst confessed during the GNU there wasn’t a country they had subjected to so much political and economic pressure like Zimbabwe that survived. He wondered where we drew our resilience.
Mbuya Nehanda, the celebrated Shona spirit medium during the Shona and Ndebele uprisings from 1893 to 1896, was not a military commander, yet the day the BSAP captured her in December 1896, they jubilantly declared the war was over.
She was the spiritual guide of the revolution.
Some people believe the Zimbabwe revolution is not only deeply spiritual, but that it is not led by mortals; and that when the chips are down, there is divine intervention, the way it happened in 2008.
For feedback, email: alexkanengoni@gmail.com