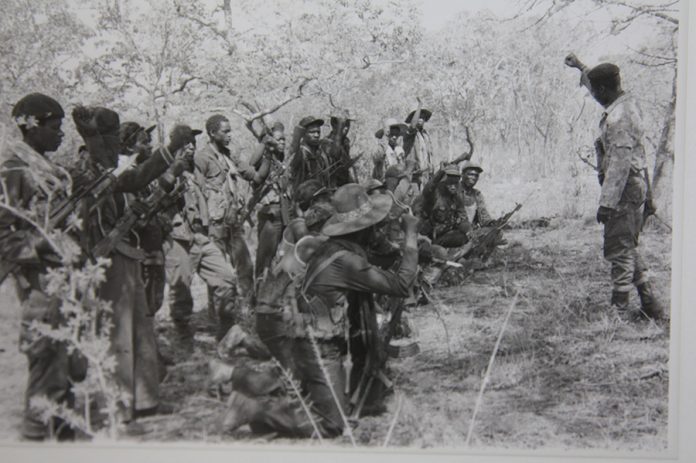 WHEN we came back from the liberation struggle we did not bring back Zimbabwe as a cake to be hacked to pieces with everyone fighting to get the biggest slice and falling over each other in the stampede to position themselves to beat the next person chop the largest piece.

That is barbaric, that is not how Zimbabwe was liberated, it was liberated by self-sacrificing not by hacking it to pieces to devour the largest piece before anyone else.

There are those who left for the struggle, who never got the chance to be trained and be fielded to the front because of logistical limitations or because they were too young.

And for this reason when war veterans were pensioned off, and assisted in various forms, they were told they belonged to a different category from non-combatant cadres, and so would be attended to later.

Though they are combatants in every sense because what makes one a combatant is not the military training but the willpower to lay down your lives for the  country and the devotion to work towards this cause. These comrades did not fight anyone, they remained silent to this day, to this moment when the Government announced that they could now register so they could later be vetted with the successful ones getting benefits.

The form and extent of benefits are yet unknown but no-one is disturbed about the size of the package.

The fact that they never fought anyone, never went to the streets to demand assistance as was granted their fellow comrades, demonstrates, reveals who they truly are; comrades who were in the struggle for the sake of Zimbabwe, not for themselves.

Therefore though they were no less of war-veterans, they deserved no less than their fellow combatants, who offered their lives for Zimbabwe like everyone else. They suffered everything meted out by the enemy, trauma of raids, injuries, hunger, disease, food poisoning, but they did not fight for benefits.

They needed assistance like everyone else, they had a right to it as much as their compatriots who were put first, asi vakatevedzera Nzira dzaMasoja, they patiently carried on with their lives without demanding special consideration.

Why have some been aggressive, in demanding special consideration?

They were not in the struggle for themselves.

Their greatest achievement and consolation is that they worked on something and succeeded, they liberated Zimbabwe.

Each one of them was a moral force which said Zimbabwe must be free, I offer my life for her freedom, they were part of Zimbabwe’s iron will to get rid of British armed robbers.

They were combatants but despite this, when they came home, they were categorised differently, but they did not wage a war to position themselves to hack pieces for themselves.

They were told your time will come, and they let it be, though it took 41 years for their turn to come.

These comrades are an example of those who truly love Zimbabwe.

Not those who fight to position themselves to chop the largest piece of cake.

Let the example of these combatants, both ZANLA and ZIPRA, speak to the masses what Udzimbahwe is all about: To love your country with all your heart and all your soul, to put your country first.

That it is not a cow to be milked by those with the longest legs and biggest buckets.

Had these combatants not put their Zimbabwe first it might not have been easy for the nation. They could have campaigned to be rewarded and possibly caused disharmony but they quietly said:

By taking this position they were underlining the anthem of each freedom fighter:

This is the mission of each true combatant, of each comrade, each freedom fighter. Kunyaradza Zimbabwe zvakanyanyisa even now.

They are true and we salute them!

We salute all who never thought of anything but Zimbabwe, who remember that the most important thing is to protect Zimbabwe with all that is in you, all that you are.

People erroneously ask: You went to the struggle? And what do you have. Wakafirei? You don’t get angry you just realise they are vibrating at a totally different frequency, miles apart from you.

But usually you want people to reason and analyse for themselves.

So we are here, they fought and they won, and though they never got anything special and had to struggle to make it they chose never to disturb Zimbabwe, these are true Chimurenga heroes of the liberation struggle, following in the footsteps of Mbuya Nehanda and all the Chimurenga heroes and heroines.