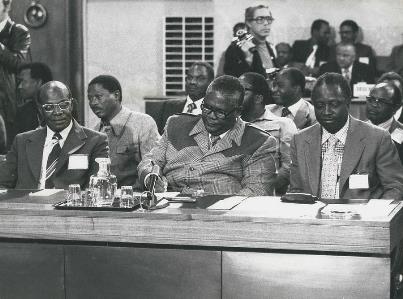 IN the village, language frequently borrows from the social and political interactions of its inhabitants.
Today you can hear a village ambuya say, “Wadii kuwatsura”, meaning “why not send a Whatsapp message.”
Before independence a sizeable number of men in their prime worked in the then towns of Salisbury (Harare), Gwelo (Gweru), Bulawayo and Umtali (Mutare).
From Mutare they brought ‘hino’ and ‘iya’, the former becoming a nickname for a ‘home defender’ in the village.
Bulawayo-based workers smuggled ‘magumedhe’, ‘madhodha’, ‘magwaza’ and ‘jabulani’ into the village lingua franca.
They became people’s names.
It was probably Salisbury’s newspaper animals that brought us ‘Chombe’.
The war added ‘Geneva’ and ‘détente’ to my growing vocabulary.
Village autochthons had given me unique Shona words like ‘kufoya’ and ‘kurobwa’.
In the run up to the 2014 ZANU PF National People’s Congress, ‘presidium’ was added to our village vocabulary.
Three of these recent village terms; ‘Chombe’, ‘Geneva’ and ‘Détente’, are steeped in history.
‘Chombe’, meaning sellout or betrayer is a derivative from Moise Tshombe, Governor of the Katanga Province of the Congo in the 1960s.
He connived with Western imperialists to take advantage of post-independence Congolese strife and conflict to secede from the rest of Congo.
Tshombe, a darling of the imperialists who described him as Christian, anti-communist and pro-Western, claimed he was seceding from Lumumba’s chaos. Tshombe’s treasonous act started a chain of events that culminated in the overthrow and execution of Patrice Lumumba, that doyen of pan-Aficanism.
Later, Tshombe briefly became a puppet Prime Minister in 1964 before fleeing, after hardly a year in office, into exile where he died in disgrace in 1969. Tshombe’s name, among nationalistic and progressive Africans, became a Shona term for sellout, ‘chombe’ or to sellout, ‘kuchomba’.
I have no doubt this is how ‘chombe’ found its way into the village as ‘Harari’ slang in the late 1960s.
‘Geneva’ arrived in the village in late 1977, together with the war.
It was girls’ code for monthly period or ‘kumwedzi’ as we boys crudely called it. That time I only imagined ‘Geneva’ as some far away mythical country.
Much later in life I came to understand the part link.
‘Geneva’ was the aborted conference to the Rhodesian conflict, held in Geneva, Switzerland, between October and December 1976.
The conference was chaired by British mediator, Ivor Richard and attended by the following delegations; Patriotic Front under Joshua Nkomo and Robert Mugabe, the illegal Rhodesian regime under Ian Smith, ZANU under Ndabaningi Sithole and ANC under Bishop Abel Muzorewa.
It officially opened on October 28 and had collapsed by December 14.
The Smith delegation was insisting on the Kissinger plan that allowed for dignified and prolonged white exit, including a white-led constitution making exercise. African nationalists were divided.
The Patriotic Front, sensing victory at the war front, wanted an independence date not more than a year after the conference.
Sithole wanted a ‘presidium’ of four nationalist leaders to run the transitional affairs.
Muzorewa wanted a transitional Prime Minister to be elected using the one man one vote system.
The conference was adjourned and never reconvened.
It was a long meeting in a far-away place that had presented some hope for majority rule and an end to the war.
After that the war intensified and arrived in new areas like Unyetu.
Also to arrive was ‘Geneva’ as slang.
Détente has only been a village term in the last few years.
I understood it to refer to Party activists, vafana vemadhitande, known for organising clandestinely in-order to achieve certain objectives.
When I first heard it, it sounded innocent and an expression of the vigour and vitality of ‘Young Turks’.
I sincerely hope it has nothing to do with historical meaning of the term.
The term ‘détente’ generally refers to the period of the easing of Cold War tensions between the US and the Soviet Union from 1967 to 1979.
‘Thawing out’ and ‘unfreezing’ was the official foreign policy of the United States under presidents Richard Nixon and Gerald Ford in dealing with the Soviet Union and its allies.
The era was a time of increased trade and cooperation with the Soviet Union and the signing of the SALT treaties.
Détente resulted in application of a similar approach by the Ian Smith regime under direction of BJ Vorster, Prime Minister of South Africa and Henry Kissinger, USA Secretary for State.
The panic button had been triggered by the socialist coup in Lisbon and the subsequent independence of Angola and Mozambique.
This robbed Ian Smith, South Africa and the CIA of critical allies in resisting majority rule in Zimbabwe.
Détente sought to prevent an inevitable military march into Salisbury by ZANLA and ZPRA.
It sought a negotiated conclusion to the liberation struggle in exchange for releasing jailed nationalists.
It was also hoped that the release of nationalists would fuel fights for leadership and further cripple the liberation struggle.
In the ensuing chaos independence would be granted under a puppet nationalist leader.
Rhodesian intelligence, with British, American and South African support then sought to identify the most qualified puppet nationalist.
This period lasted from December 1974 to January 1976. In the village vocabulary ‘madhitande’ appears to refer to meetings meant to cripple others’ plans, a meaning dangerously close to history.