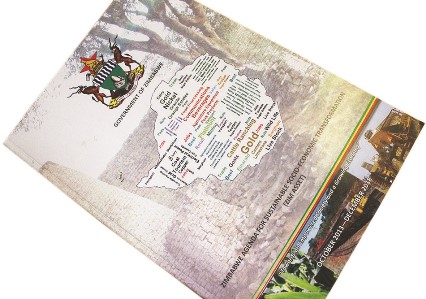 THE Zimbabwe Agenda for Sustainable Socio-Economic Transformation (Zim-ASSET) is a well-crafted document which makes an interesting read.
It brings out a sense of hope in the recovery of Zimbabwe’s economy.
The executive summary of the document is very scholarly.
The strategy for the implementation of the project is well focused and well-grounded on the clusters approach.
This enables evaluators to check on individual cluster for progress in the implementation.
The foreword by President Robert Mugabe provides some guidelines as to the intention, purpose and thrust of the project.
As noted in his words, “This results based agenda is built around four strategic clusters that will enable Zimbabwe to achieve economic growth and reposition the country as one of the strongest economies in the region and Africa.”
The four strategic clusters identified are: Food security and nutrition, social services and poverty eradication, infrastructure and utilities and value addition and beneficiation.
These clusters identify with the people’s aspiration and they can be classified as socially oriented.
The cluster approach is not new; we have had a committee on agriculture, a committee on infrastructure, but it is the implementation that is lacking.
The model of implementation needs to be enhanced for instance, the operational concept of an army, a small unit like a section is created and someone is put in charge to account for the victories scored and the deaths suffered.
The Zim-ASSET if well implemented and worked upon can bring very positive results to the economy of the country and to the general well-being of the Zimbabwean society.
Zim-ASSET must be implemented outside the mantra of economic sanctions which has become a perennial excuse for non-performers.
Indeed sanctions have been imposed on Zimbabwe and have impacted negatively on the livelihoods of Zimbabweans. But we need to pretend that there are no sanctions otherwise a view is distilling which is that underperformance is solely due to sanctions.
Zim-ASSET has been crafted to bust those sanctions through the ‘judicious exploitation of the country’s abundant human and natural resources’.
Challenges to Zim-ASSET
The first challenge noted is the lack of knowledge by the people on what exactly Zim-ASSET is.
The need to understand Zim-ASSET cannot be overemphasised as it is a prerequisite for its success.
There is need to clarify Zim-ASSET as a policy statement and how it interrelates with the indigenisation policy.
Zim-ASSET as an implementation policy document seems to be more flexible on the courting of partners with whom to do business.
For instance, if a private company is to build a road under the built operation transfer, there is no talk about indigenisation.
Whereas to harmonise the two policies one would suggest that it must be made clear that a company is to build a road, 60 percent of its raw materials must be supplied by indigenous companies and 40 percent to already existing companies.
There is also a need from the Government to come clear on cardinal policy pronouncement such as the property rights.
While the indigenisation policy is based on a 51/49 percent, one may not feel comfortable to invest under such conditions.
There is need to encourage indigenous entrepreneurs to form 100 percent owned companies that will supply the raw materials without necessarily taking over existing companies.
There is need for a physical inspection of the equipment that companies claim to have and also look at the capability, expertise, capital and capacity to undertake a project.
Zim-ASSET must bring about opportunities for indigenous people to form their companies with the support of Government especially on the supply of raw materials, private security services and such other services that can be sourced locally as long as property rights are guaranteed.
The issue of mortgaging the country’s mineral resources must be thoroughly interrogated.
What percentage of the mineral wealth must be used or mortgaged as obviously a 100 percent mortgage will be dangerous for the country’s present generation and future generations.
The idea of mortgaging the country’s mineral resources is noble, but before that, efforts to examine on the tenders that have been awarded to both foreigners and local companies must be intensified.
There are so many tenders that were awarded, but have not materialised and the implementation of Zim-ASSET cannot afford to continue to award tenders to companies for speculation purposes.
Judging by the few articles that have appeared in our print media that lacked a deeper understanding of the Zim-ASSET, one is likely to trash the project as an elitist project.
I will commend on two articles that appeared in The Patriot, ‘Zim-ASSET and the Mgagao document’.
While the writer wanted I presume to link the document with the resoluteness of the fighter, to fight the war, the Zim-ASSET document lacked the political ideology on which it is anchored unlike the war of liberation.
It is critical for the party whose Zim-ASSET is its brain child to clearly enunciate its party ideology to allow the young leadership and supporters that have joined the party to clearly understand what the party seeks to achieve through its government.
Another article is by Professor Sheunesu Mpepereki, ‘Zim-ASSET and soya bean production’.
In Part One, one will find it difficult to relate the article with Zim-ASSET as the only statement that relates to the project is, “to make Zim-ASSET operational, we need to walk the talk”. Presumably the statement is pregnant with meaning, but one might be comfortable with a well explained inter-relationship on the production of soya beans and Zim-ASSET showing in which cluster does this come under.
The unavailability of the
Zim-ASSET document in indigenous languages creates illusions and lack of knowledge to the general public of what Zim-ASSET is all about.

l To be continued