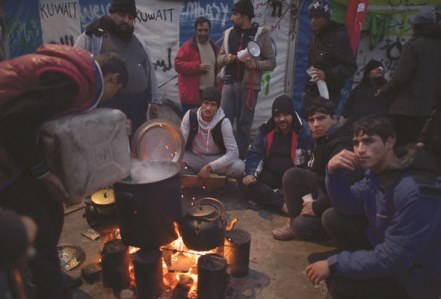 THE temperatures have dropped to minus degrees at night.
It is that time of year dreaded by many people here in the UK, especially migrants, because the winter makes you home sick.
And this is what makes it Europe and not Africa, Arabia or Asia.
But somewhere in Europe, in the middle of this chilling weather, there are about
3 500 migrants, mostly from Africa, Syria and Afghanistan, who are enduring this harsh weather day and night.
They are people whom the French and British politicians would rather forget or not talk about.
However, the media has its own way of reminding us and the politicians of their existence. Some write about them during election time; others write about them when some disaster happens or when some well-known celebrity donates goodies to them.
Depending on your background, some will feel for them, while others will condemn them as scum-bugs trying to invade the UK because of its benefits system.
It doesn’t matter which way you look at it, they are also human beings.
And as if they have now lost their identity, these young men and women are known as the Calais migrants and their makeshift squatter camp as the Calais Jungle Camp.
It is called a jungle because Africa is portrayed as a jungle here in the West.
These young people are living in tents made from wood, plastic and sometimes thatched with grass as they wait for the opportunity to enter Britain through the Channel Tunnel.
In October this year the French and British governments were condemned by the UN Special Representative on International Migration, Mr Peter Sutherland, for turning a blind eye to the plight of these migrants.
In The Independent (October 9 2015) he said: “The conditions in which the migrants were living were truly shocking. Doctors there told me of clear evidence of TB and scabies. This is a disgrace. It is also a clear example of the broader inadequacies in Europe’s practical expression of its much-vaunted values… The reality is that the issues surrounding the mobility of mankind in an era of global communications of all kinds require far more than the pandering to the xenophobia and racism increasingly evident in parts of the developed world.”
However, while European governments would rather not acknowledge their existence, some human rights groups and philanthropists have been going to the camp to give immigrants food, clothes and medicines.
This week they were given real fur coats worth half a million pounds by an animal rights charity called People for the Ethical Treatment of Animals (PETA).
Donating the fur coats to the refugees, the director of the charity organisation PETA acknowledged that the refugees at Calais are suffering.
He said: “PETA can’t bring back the minks, rabbits, dogs and other animals which were slaughtered and had their fur ripped from their bodies, but we can give help to refugees who are struggling to survive. PETA is calling on fur-wearers to clear their consciences and donate their coats so that desperately cold refugees – the only people with any excuse to wear fur – will stay warm this winter.”
But most of this humanity is coming from individuals and charities, mostly white people, while Africans in the UK and France are mum to the suffering of their fellow countrymen, including women and even children.
One of the people doing this charity work is my 65-year-old, white Irish friend, who recently retired from her job.
Last month she used some of her pensioner’s money to go to the Calais Camp to donate goods she collected, to the refugees.
She spent a week at the camp, doing some voluntary work. She said she would go again as soon as she saves enough for the tickets and accommodation in one of the hostels near the camp.
I was so touched by her dedication that it occurred to me Africans in the UK and France are not doing enough, if anything, to support their own people at this camp.
There are now many Africans settled in the UK and France, yet when it comes to any donations going to Africa, be it after a storm, natural disaster or war, we close our eyes and hope other people would do it for us.
Where is the spirit of hunhu/ubuntu that we were taught as we grew up?
A lot of African migrants who come to Europe realise that Europe is not the Biblical promised land that they had been expecting. The reality of life here is difficult to perceive before one gets here and to many people it will be too late. You learn to get by, taking each day as it comes.