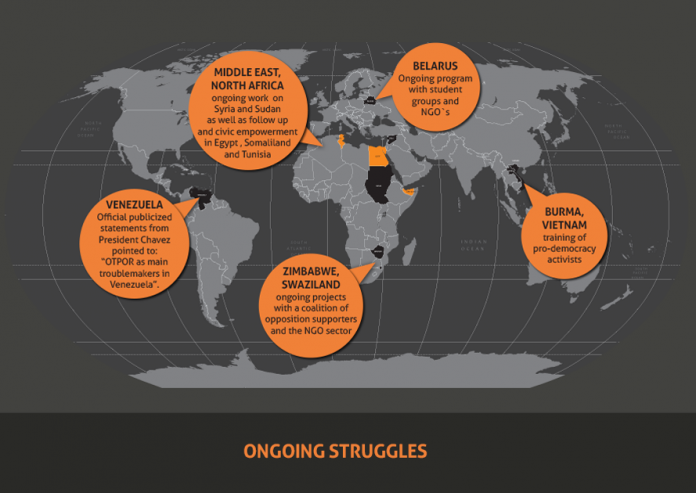 SRDJA POPOVIC, the Serbian activist credited for bringing down the regime of Slobodan Milosevic and effecting the Arab Springs, is said to be in the country to help the opposition Movement for Democratic Change (MDC) stage violent anti-government protests.

The MDC-Alliance tried to be ‘sophisticated’ this time around, rolling out city-by-city demonstrations on different dates, with Harare launching on August 16 followed by Bulawayo (August 19), Gweru (August 20), Masvingo (August 21) and Mutare (August 22).

The demos dismally failed as Zimbabweans snubbed them.

Popovic is the executive director of the Center for Applied Non-Violent Action and Strategies (CANVAS), an organisation that has been involved in the mobilisation of small groups of Zimbabweans to lead Zimbabweans in a mass uprising to remove ZANU PF from power, since 2003.

Popovic is said to have arrived in Zimbabwe on August 7 at the Robert Mugabe International Airport disguised as a tourist.

However, Popovic denies any links to the MDC demos.

“Just for the record: I have never been to Zim in my lifetime, or got involved in any kind of local policy or partisan issue,” said Popovic on his Twitter account.

However, The Patriot can exclusively reveal that last year, prior to the elections, in May, Popovic trained a group of 25 civil society and opposition parties’ members from Zimbabwe at Protea Hotel in Livingstone, Zambia.

Popovic was the lead trainer at the CANVAS workshop.

He is in charge of handpicking civil society and opposition parties for training.

Participants received US$400 each for the week-long workshop.

The workshop formulated strategies that were to be implemented during and after elections.

A three-point strategy was adopted which includes ‘dilemma action’, ‘declare own results’ and ‘question legitimacy’.

Some activists were taught to generate messages to the effect the MDC-Alliance had won the July 31 2018 elections even before the results were counted and announced.

Others were to be ‘independent analysts’ who would confirm and create the image of poor human rights record in the country and yet others were trained to be perpetrators of violence in the ranks of the opposition.

Earlier on in February 2018, another group had received similar training in Cape Town, South Africa.

Popovic is known by many as a leading architect of regime changes in Eastern Europe and Africa since the late-1990s, and as one of the co-founders of Otpor, the US-funded Serbian activist group which overthrew Slobodan Milosevic in 2000.

And Otpor’s campaign against Serbian President Slobodan Milosevic was successful in October 2000 where thousands of protesters took over the Serbian Parliament.

Otpor first tried to brand itself as an anti-corruption NGO, while some of its members went into politics, such as Popovic, who won a seat in the Serbian Parliament in 2000 and was an environmental advisor to the Djindjic Government.

They finally reconstituted themselves as a political party in 2003, but failed miserably to attract any votes.

But for the US State Department, Otpor’s performance and effectiveness was so impressive that it was to be the template for similar underground movements that came and went, namely, Zubr in Belarus, Khmara in Georgia, Pora in Ukraine and Zvakwana/Sokwanele in Zimbabwe (which failed miserably).

In 2002, a group of Zimbabwean opposition activists became the first to be trained by Otpor.

Infact, it was on a trip to SA to train Zimbabwean activists that Popovic decided to establish CANVAS.

A source told The Patriot that training included watching videos from Serbia, the civil rights movements in the US and lately the Arab Springs.

“This gives activists insights into organising mass movements around social issues and rallying citizens around the issues,” said the source.

“The training then empowers participants with skills on how to ‘corner a violent regime’ and get leverage.”

Since then, Popovic and his friends have been training insurgents around the world.

On their website on where they have been, Zimbabwe is on top of the list in Africa

It is important to note that every one of those countries happens to also be a target of Washington’s regime-change agenda.

These governments would have refused to toe the Washington line on key foreign policy issues, or contain vital raw materials such as oil, natural gas or strategic minerals.

Alas, in Zimbabwe the organisation has failed dismally.

And CANVAS confesses it is an ongoing struggle.

“Zimbabwe: Ongoing projects with a coalition of opposition supporters and the NGO sector,” notes CANVAS on its website.

Zvakwana was used to bomb police stations and railway-lines, destroy or deface information signals along highways, spray MDC graffiti on any surface including private perimeter walls and public buildings.

Zvakwana was also trained to defy authority, boo and pass derogatory comments on Government officials at public gatherings as well as insult and taunt the police.

This was to psych people and remove the aura around the President and his Government.

But the red revolution that was billed to occur on many occasions between 2002 and 2008 never saw the light of the day in Zimbabwe.

All of them failed miserably.

The attempts include the ‘Final Push’ of 2002, which would have been a ‘popular and massive’ street march that would end at the State House with the installation of the MDC leader as president and the 2007 ‘Save Zimbabwe Campaign’, a defiance

campaign that would make the country ungovernable, resulting in the collapse of ZANU-PF.

However, Popovic is optimistic, though, that CANVAS-type techniques can be successfully transferred to movements for broader social change.

He reckons: “There are many parallels and overlaps.”

In May, police arrested seven civil society members returning from the Maldives where they had attended a workshop organised by Popovic’s CANVAS.

Tatenda Mombeyarara of the Citizens Manifesto, George Makoni of the Centre for Community Development in Zimbabwe (CCDZ), Nyasha Frank Mpahlo of Transparency International Zimbabwe, Gamuchirai Mukura of Community Tolerance Reconciliation and Development Trust (COTRAD), Farirai Gumbonzvanda of Rozaria Memorial Trust, Sithabile Dewa of Women’s Academy for Leadership and Political Excellence and Rita Nyamupinga of the Female Prisoners Support Trust underwent training “…on how to mobilise citizens to turn against the government of Zimbabwe and to engage in acts of civil disobedience and/or resistance to any law during the anticipated national protests by anti-government movements.”

It is alleged the group had “…also trained on how to operate small arms and to evade arrest during civil unrest” as well as being “…taught on counter-intelligence and acts of terrorism.”

To legitimise the gathering, ZANU PF and Government departments were also invited.

The Zimbabwe delegation were sponsored by Zimbabwe Coalition on Debt and Development (Zimcodd) led by Janet Zhou.

The programme was running under the theme ‘Rebuilding People’s Movements within Southern Africa’s Climate, Political and Socioeconomic Emergencies, Towards Radical Democratic Alternatives and Just Transition’.

Popovic first came to international notice as the founder of the Belgrade student political activist organisation Otpor which means ‘Resistance’ in Serb.

That was soon to change.

He and other Otpor co-founders were trained in the methods of US regime-change specialist Gene Sharp, founder of the Albert Einstein Institute in Cambridge, Massachusetts, and by US State Department soft coup specialists such as Belgrade Ambassador Richard Miles and other trained US intelligence operatives, including election specialists and public relations image makers.

Guiding Otpor’s Milosevic ouster operation, US Ambassador to Serbia Richard Miles was a specialist in regime change, far more so than in classical diplomacy.

The US Agency for International Development (USAID) channelled millions of dollars to Otpor through commercial contractors and through the US-Government-financed NGOs: the National Endowment for Democracy (NED), the National Democratic Institute, and the International Republican Institute (IRI).

The Open Society Institute of George Soros also funnelled funds into Popovic’s Otpor for the toppling of Milosevic.

According to Michael Dobbs, who was foreign investigative reporter for The Washington Post during the Milosevic ouster, the IRI paid for Popovic and some two-dozen other Otpor leaders to attend a training seminar on non-violent resistance at the Hilton Hotel in Budapest in October 1999.

This is where Popovic and the other handpicked Serbian students received training in such matters as how to organise a strike and how to communicate with symbols, such as the clenched fist that became their victory sign.

They learned how to overcome fear and how to undermine the authority of dictatorial regimes.

The principal lecturer at the secret Hilton Hotel meeting was Gene Sharp’s associate, retired US Army Colonel Robert Helvey, a former Defence Intelligence Agency analyst who trained and then used the Otpor activists to distribute 70 000 copies of a manual on non-violent resistance in Serb translation.

Helvey worked withGene Sharp, founder of the controversial Albert Einstein Institution, teaching techniques to the US Government to conceal its coups under the guise of non-violence.

Sharp was described by Helvey as “…the Clausewitz of the non-violence movement,” a reference to the renowned Prussian military strategist.

Popovic and his Otpor were recipients of a major share of over US$41 million from the US Government for their ‘democracy-building’ campaign in Serbia.

Dobbs describes the US involvement:

“Behind the seeming spontaneity of the street uprising that forced Milosevic to respect the results of a hotly contested presidential election on September 24 was a carefully researched strategy put together by Serbian democracy activists with active assistance of Western advisers and pollsters… US-funded consultants played a crucial role behind the scenes in virtually every facet of the anti-drive, running tracking polls, training thousands of opposition activists and helping to organize a vitally important parallel vote count. US taxpayers paid for 5 000 cans of spray paint used by student activists to scrawl anti-Milošević graffiti on walls across Serbia.”

In short, Popovic began his revolution-making career as a regime change specialist in an operation funded by the CIA, US State Department, US Government NGOs, including the infamous NED and the Open Society Institute.

The Washington Freedom House is known to have financed at least a part of the activities of CANVAS.

Freedom House, closely tied to the US neo-conservative war lobby, gets most of its funding from the US Government.

In addition, the overthrow of Milosevic was accompanied by US funding for the creation of a robust media apparatus in Serbia, and Popovic’s wife, Masa Stanisavljevic, worked at one of the US funded radio and TV outlets as a journalist and anchor of B92 from 2004-2009.

Popovic’s wife also worked at Stratfor for a year.

Now Popovic brings his checkered career to Zimbabwe where, not a dictator, but a very popular true democrat and a listening President is the target of Popovic’s peculiar brand of US State Department dubious democracy.

This will not at all be as easy as toppling Milosevic; even with the help of NGOs being trained in Maldives, Zambia and SA.