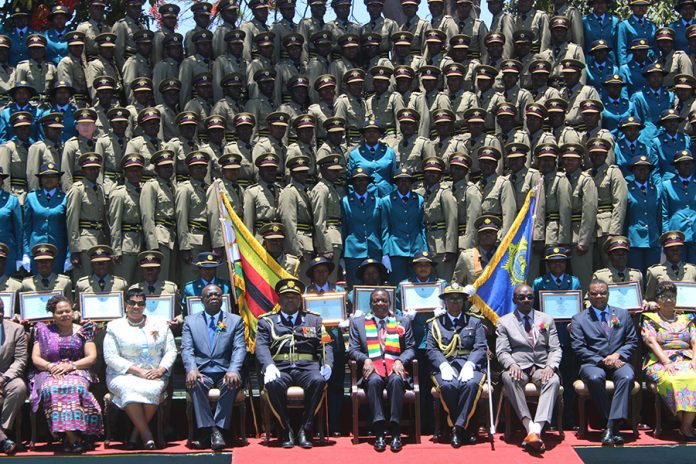 PRESIDENT EMMERSON MNANGAGWA has challenged the Zimbabwe Republic Police (ZRP) to review its systems so that it remains relevant in discharging its duties during the Second Republic.
The police force was previously known for its corrupt activities which saw many of them quickly acquire assets from the spoils.
As a result, people disregarded the duties of the force with many people paying their way out of crime.
Speaking during the recent graduation of over 600 police graduands in Harare, President Mnangagwa said the curriculum should ensure that police officers defend their country.
“This particular occasion is momentous as it comes after the advent of the new dispensation and the Second Republic, whereupon our nation has a new lease of life and a greater impetus to turn around every sector of our economy as we strive to achieve upper middle-income status by 2030.
“I call upon you to constantly review the curriculum of the training programme so that it remains relevant in moulding police officers who have the requisite attributes of professionalism, loyalty, patriotism and unyielding devotion to jealously guard the pillars of peace, law and order in our nation.
“We must modernise ZRP to be technologically savvy, responsive and robust in view of the well co-ordinated criminal syndicates who manipulate current trends. I encourage the public at every level to respect the authority of the police as borne out of the Constitution and a critical partner to law enforcement and state security architecture.
“Each officer is expected to know some of the languages in the Constitution and culture of the community where he or she serves. This practice must be perpetuated with no deviation, to enhance national harmony, cohesion and unity. We are one people, united by one flag and one National Anthem.
I am confident that this rich selection of courses has transformed the graduands into patriotic, disciplined, honest, reliable, capable, hardworking, devoted and ‘corruption free’ generation of police officers.”
The graduands undertake courses in political history of Zimbabwe, human rights and policing, the Constitution of Zimbabwe, public order management with the programme involving on-the-job training where recruits are attached to various police stations countrywide, before coming back for final refinement, polishing and to remedy identified shortcomings.
President Mnangagwa highlighted that the new adminstration is geared to ensure that the law is followed.
“In the Second Republic, there are no sacred cows. No one is above the law. Our laws will be enforced without fear or favour,” said the President.
“On its part, Government is committed to support ZRP to acquire modern, advanced training, investigation and crime detecting and monitoring capacity.
“Government recognises the need to urgently address the critical resource challenges in our police force in the discharge of their duties.
Notably, we are aware of the current challenges being experienced by the ZRP for traffic law enforcement, primarily due to increasing volumes on our roads across the country.
To this end, Government will increase its support to the police to speedily finalise its electronic traffic management system. This will see the installation of digital cameras and other monitoring gadgets at traffic intersections and along our highways.
“Presently, the Police Service Commission has been tasked to craft a budget document which comprehensively covers the needs and requirements of the force.
“I challenge our police officers to be agents of the modernisation of our police force through continuous study, increasing your technical abilities, professional acumen and specialised training. More importantly, always be better prepared than the criminals you will meet in your line of work.”
President Mnangagwa challenged the young police officers to uphold the virtues of loyalty, commitment and professionalism and live up to the standards and requirements of their profession.
He challenged them to diligently serve the people of Zimbabwe as beacons of justice, law and order, build harmonious relations between the police stations and the communities they will serve.
He encouraged them to shun corruption and never succumb to the temptations to advance self-interests ahead of the broader aspirations of the people they serve.