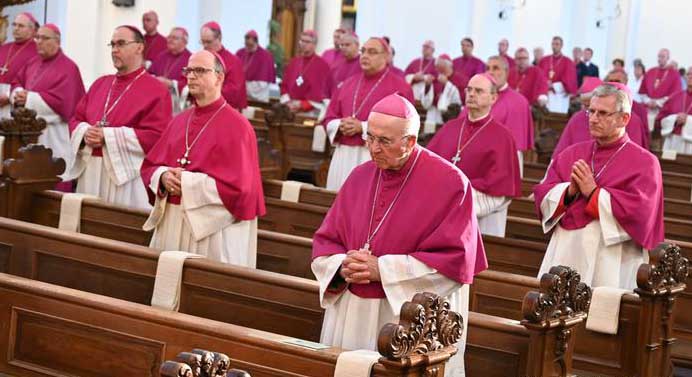 AT the beginning of the 15th Century, the Catholic Church provided the ‘ethical’ base for the enslavement of American natives and ‘sturdier’ Africans, stating that, unlike Europeans, the African had no soul.

Now let’s look at what the word ‘soul’ means.

According to Collins Gem English Dictionary, it means the  spiritual and immortal part of a human being, essential part or fundamental nature.

Other dictionaries describe the soul as the spiritual or immaterial part of a person regarded as immortal.

What was the state of the African people in the 15th century for the Catholic Church to say that statement at that particular time?

Their history (white people) tells us that we were a conquered, downtrodden people, at the mercy of white invaders, with no identity, no religion, without intellectual energy and no sincere feelings towards one another, in short, a race of Judas Iscariots.

The Catholic Church was not using scriptures but was leaning on theology, for religion is not the creation of God but of man and, therefore, can be manipulated to suit any situation.

A conquered people will always be made to feel inferior as long as they don’t free their minds. Africans are embarrassed by their skin colour; some bleach it while others stretch their hair and do nose jobs.

Miseducation about our religion and history has destroyed our identity and made us a people defined by other races.

At least in the 15th Century, even though we did not have a ‘soul’, as the white savages claim, Africa was one ‘country’.

More than a 100 years after the partition of Africa and gaining of our independence, we have failed to return to being one ‘country’ simply because our former conquerors want the status quo to remain so; a divided people are easy to manage than a united one.

This is an old-age strategy used since time immemorial to loot resources of a conquered people.

Any attempt at unifying the soul and ‘country’ of Africa is heavily sabotaged and the leader of such efforts is always isolated and, in extreme cases, eliminated.

In February 1966, Kwameh Nkrumah was removed from power by the military, sponsored by the UK and US.

Since then, no African leader has effectively proposed and pushed for Africa to become one country and regain its mangled soul.

Africa’s story has been manipulated by its former colonisers.

The foundation of the Rwanda genocide of 1994, where one million people lost their lives, was put in motion when Rwanda became a Belgian colony.

The book of Sankofa Movement ReAfrikanization and Reality of War about Rwanda before the Belgians and during their time there says: “Another more contemporary graphic tragic example of Europeans disruption of co-operative network of various Afrikan  clans and ethnic groups is the situation in Rwanda. The history, unity of Rwandan Hutu, Tutsi and Twa is evidenced in the fact that even today there is one national language, Kinyarwanda. That is understood by all and there is one indigenous cultural/spiritual system. It was the design of European colonial interlopers to superimpose divisiveness and ethnic conflict.

The Belgians could hardly have pretended they were needed to bring order to Rwanda. Instead they sought out those features of the existing civilisation that fit their own ideas of mastery and subjugation and bent them to fit their purposes, the Belgian colonials stuck with the Hamitic myth as their template and ruling Rwanda more or less with the Catholic Church, they set about radically re-engineering Rwanda society among so called ethnic lines. Monsignor Leon Classe, the first Bishop of Rwanda, was a great advocate of the disenfranchisement of the Hutu, the reinforcement of the ‘traditional hegemony of the well born Tutsis’ in 1933-1934. The Belgians conducted a census in order to issue ‘ethnic’ identity cards, which labelled Rwandans as either Hutu 85 percent or Tutsi 14 percent or Twa 1 percent. Until 1959 there had never been systematic political violence recorded between Hutu/Tutsi anywhere [ Gourevitch]. My question is what did the Belgians mean by ‘reinforcement of the traditional hegemony of the well born Tutsis’.’’

According to Professor Ayir Kwei Armali: “…a people trapped in penitential identities unable to connect with more than a few generation of their history are a helpless chaff in the hurricanes of global history.’’

Great African writers have, and still are, producing great African history to challenge the current racist world history yet their published books are not gracing or are not part of the curriculum of most African Universities.

A writer who challenges the current racist world history is deemed a rebel and his/her works not fit to grace shelves of African Universities lest they pollute graduates being groomed to serve Western interests.

Which brings me to question: Do we have independent African universities?

As far as white people are concerned, our story begins when they came in contact with us.

Because we have failed to be united and be one people, we are still tagged as Anglophones, Francophones, Lusophones and Arabophones.

The necessary re-education of blacks and possible solutions to racial crises can begin when blacks fully realise they are a divided people and need to be united.

Africa’s implosion and explosion started from within; it was caused by the unbridled greed and corrupted African leadership and priest class of the ancient African people, the very groups entrusted to safeguard social order.

Another fact was arrogance.

A third factor was complacency, bred in part by over confidence in presumed permanence of themselves as progenitors and ministers of the world.

The corrosive effect of greed and arrogance were augmented by the desecration of essential spiritual vessels.

The first shrine to be desecrated was the shrine of the African motherhood and womanhood.

That desecration was accomplished through an insidious peripheralisation of the woman role from that of a complementary twin.

Currently, the woman role approximate that of a lesser partner though still far removed from that of a chattel role played by typical of the Indo-European construct.

With this desecration, the African family disintegrated into what it is today.

Africa must look to other regions to save itself.

For instance, ‘new kids on the bloc’ religions have failed to penetrate Asia and the Indian sub-continents as their religions are ruling supreme and family values are intact.

You don’t find people denigrating themselves and their ancestors in these regions.

Was the Catholic Church correct to say we are a race with no soul?

People must remember that the Catholic Church was built on the ashes of the Egyptian mystery systems.

It thus could not declare who had nor had no soul.

Africa’s fate is in its own hands.

All we need to do is to simply unite.