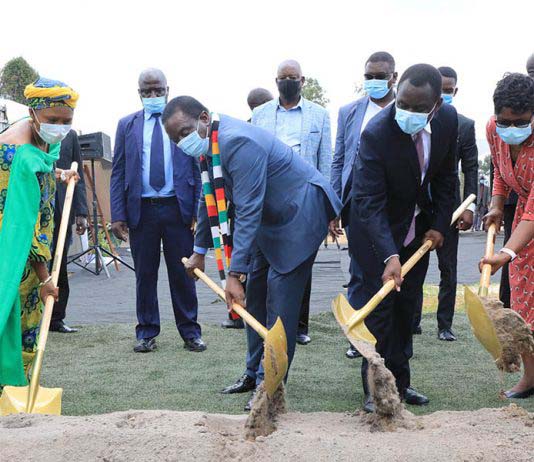 IN 1992, vagaries of the weather and ESAP had battered our nation and we were experiencing the worst drought the country had ever witnessed.

I was in primary school and I saw my mother working very hard to feed us, struggling to educate us.

In such situations, its easy to lose hope and imagine that things can only get worse.

My teachers saw the potential in me and the sacrifices my mother was making and they would assist with my school fees.

Therefore my success is not mine alone but a collective effort.

After all is said and done, beneath the robes, l am just a village boy.

But I am fortunate to be born in a country where I can be whoever I want to be, despite the colour of my skin.

I am confident of success. My success.

And the success of my country.

My confidence is rooted in the fact that my country, Zimbabwe, Dzimbabwe, The House of Stone, has defied the odds.

Mine is a country battered left, right and centre by our former colonisers and their allies but is still standing.

A nation they wanted to bring down to its knees, with the likes of America’s Chester Crocker Morgan boldly demanding his cronies and minions to make the economy scream.

Batter it they did, riddling it with holes to sap out its life force; striking it with every weapon in their arsenal to break its every bone; and ending up throwing their plates and sink at it in desperation.

But they could not snuff the life out of this mighty nation.

Because of who we are!

The chief architect of Dzimbahwe’s colonisation, Cecil John Rhodes, would, at one time, in the dead of the night, wake up his ‘partner’ Leander Starr Jameson, just to remind him how lucky he was to be born British — ‘the finest flower of civilisation’, he declared.

He cast one glance on Dzimbabwe and knew his country would be much richer with our nation under the Queen and plunder it they did but we valiantly fought until we regained our independence.

My heart bleeds when we fail to notice and see how the West continues to interfere in our affairs, throwing spanners in our efforts to revive our fortunes.

We have a clear philosophy guiding us.

A philosophy ushering us towards our desired destination.

Nations have been built on the foundations of clearly spelt out philosophies, ethos and principles.

No call or instruction could be more clearer.

As I embrace this philosophy and look back in time for energy to catapult me into the future, I realise this is the philosophy that has always guided our nation — the ‘Nyika inovakwa nevene vayo/Ilizwe lakhiwa ngabanikazi’ philosophy.

Dzimbahwe was not established or built for us by foreigners.

From the days of the great Mwenemutapa, it has been us, black indigenes, who have built and protected our nation.

The great house of stone, a marvel up to today, a centre which administered a kingdom that stretched from Sofala to Limpopo, was built by us, for us.

The finest gold required by King Solomon to build the temple in Jerusalem was mined and processed at MaDzimbahwe.

The Portuguese, Asians and the rest of Caucasians made a beeline for our country because of its natural splendor and all that was created by us.

Mwenemutapa is a name that encapsulated the whole concept of ‘vene venyika’.

We have a history, a present and a future to look forward to because of that philosophy.

The philosophy of ‘Nyika inovakwa nevene vayo/ Ilizwe lakhiwa ngabanikazi’ is as old as Dzimbabwe itself. The philosophy manifested in the massive stone structures that remain a marvel up to today.  It resided in the fighters of the Chimurengas.

And it is in the bones and marrow of every resilient Zimbabwean who has not been crushed by forces seeking to subvert our nation.

We cannot be a happy people if we are totally dependent on others for all our needs.

We have to produce all the basic things of life needed for survival and not depend on those who seek our demise so that they can exploit us.

It is a lie that Africans are not a forceful people who are not aggressive to the point of a fight to the finish.

There is no truth in the claim that we are not resolute in our commitment to a goal and lack the devil-may-care doggedness needed to achieve a set target.

Our country was severely damaged and continues to be hamstrung by the illegal economic sanctions imposed on the country.

Zimbabwe is ours, we must be aggressive in rebuilding it and commit to the goal of later, rather than immediate, gratification.