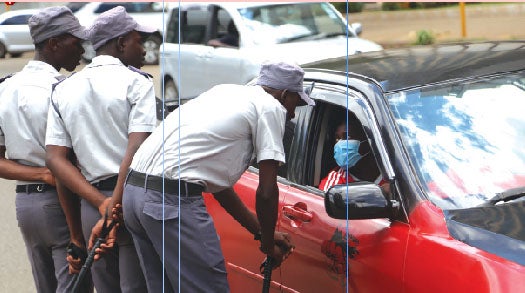 At the mercy of COVID

WITH the cases of people who have tested positive for COVID-19 in Zimbabwe on the increase, President Emmerson Mnangagwa was spot on by extending the lockdown period.

COVID-19, which has affected the world, is real and is a deadly disease with no cure so far.

The US, UK, Spain, Italy and Iran are some of the countries that have witnessed huge numbers of deaths due to COVID-19.

Zimbabwe, among many other countries, initiated a lockdown to curb and contain the spread of the virus.

During the lockdown, people have been coming up with some ‘interesting’ and ‘crazy’ stuff.

Zimbabweans have shown that they are innovative in the face of disaster through both legal and, unfortunately, other unscrupulous means.

Some unprecedented methods of survival have been devised across the social stratus because, whether we like it or not, we are all at the mercy of COVID-19.

This writer recently passed by several shopping centres in Epworth, Glenview, Budiriro and Waterfalls and saw all the shops closed but people milling around consuming beer.

Apparently people were buying beer through the back door.

The nightclub and other beer outlets are now resorting to shebeens to sell their beer.

They simply channel their beers to local home owners who will sell the beer on their behalf.

In Braeside and Arcadia, there are some individuals who deliver the beer to your doorstep.

Illicit beer brewing and sale has been on the rise since the lockdown as legal beer is now no longer affordable to many imbibers.

Unfortunately, many people have also died after consuming illicit beer.

Such is the love for alcohol in the face of COVID-19!

At a police checkpoint along Chitungwiza-Harare Road, this writer witnessed a funny incident where a man ‘abused’ his pregnant wife as an excuse to be allowed to pass.

The male policeman had allowed him to do so, but a female police officer asked the couple to open their boot and discovered that it was filled to the brim with frozen chickens meant to be delivered to customers.

That is how they ran out of luck!

Some have even tried to use letters from councillors, traditional chiefs and headmen.

In another incident, a Mufakose family discovered, in the morning, that their house had been broken into by thieves at night.

The thieves did not take any gadget, including the laptop which was on the table in the dining room but they emptied the refrigerator and the kitchen unit of all the food.

They just wanted food, obviously not for resale but for consumption.

There is no doubt people are putting their lives at risk.

At Mbare vegetable market, social distancing is unheard of. Buyers and sellers were literally falling on top of each other.

And beyond our borders, people are taking advantage of the pandemic to do illegal things.

For example, in Kenya there is a musician-cum pastor, Antony Musembi, who did a rendition of the late National Hero, Oliver Mtukudzi’s song ‘Todii’ without permission.

Musembi did the rendition of the song for his COVID-19 awareness campaign.

He thought since it was for ‘a good cause’ he could get away with it, but copyright is copyright and the law should be obeyed regardless of circumstances.

He should have followed proper channels.

One cannot break into a house or shop and loot foodstuffs and think that the law can let him/her go because he/she was hungry.

There has also been a surge in domestic violence cases during the lockdown.

The insane one is a Bulawayo woman who allegedly struck her husband to death three times with an axe on the head over a TV remote control.

This is an extreme situation of domestic violence even though the television seems to be the only source of entertainment in the home.

People are fighting in homes because some of the couples are never used to staying together for so long cooped together in the house.

Some are fighting because of lack of money to buy food while others fight after going through each other’s phones.

However, some are utilising the lockdown to make up for lost love and to make the family bond stronger.

One woman, who happens to be a wife to a prominent sungura artiste, said she and her children had never seen her husband playing the guitar live except on television.

Now that artistes are not holding shows, he has resorted to playing the guitar at home, singing to his family.

The woman said her family is so happy.

Most musicians, however, are in big trouble.

The majority depend on live shows to earn a living.

Band leaders are no longer able to pay their members who are now pursuing other avenues for survival.

For example, this writer witnessed one dancehall artiste selling whisky by his car at Braeside shops in Harare.

Despite all these difficulties due to the lockdown, people must always be reminded that COVID-19 is real and they must follow and respect everything they are told by the Government.

That way, lives can be saved.

According to one anonymous writer: “Those who get the COVID-19 virus are taken away, get isolated and when you get to the hospital there are no visiting hours.

You will not be able to take care of them and if they recover then they will be able to return home, but if not you will never see them again as you will not attend the funeral or burial.

Aren’t these reasons enough for you to stay safe, healthy and at home in the comfort of your home and family?”