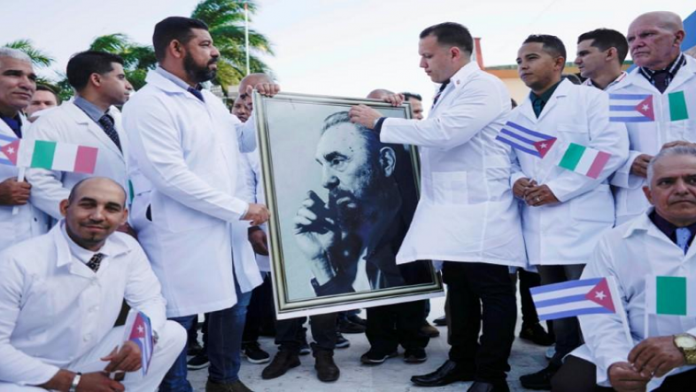 THE almost universal spread of the coronavirus pandemic means that, in both the North and the South, there is need for multidisciplinary teams of intellectuals and technocrats to ask questions about society and the future of neo-liberal capitalism in the aftermath of the same coronavirus pandemic.

For lack of space I will, in this instalment, focus on questions for the North, especially North America, because the US and the North Atlantic states have dominated global affairs since 1945. That supposed leadership role is now in serious doubt, even among North Americans and Europeans.

COVID-19 has contributed immensely to that scepticism.

The first question revolves perhaps around the contradiction between a privatised and capital-intensive medical industry on one hand and a chaotic and impoverished public health sector on the other.

This is exposed by the fact that it is Cuban medical doctors who are helping Italy fight COVID-19 and not US, British, Canadian or European doctors.

This explains why most US media also suppress the extraordinary role and contribution of Cuba to the fight against not just the COVID-19 pandemic but also, before this, against Ebola, HIV and AIDS.

But that is not the end of the contradiction.

Most readers of The Patriot understand that Wall Street in New York City has been the Mecca of the capitalist class for the last 70 years.

But now, with the appearance of body bags and mass graves in that capitalist centre impacting its image and the global and national psyche, the people are asking how neo-liberal capitalism failed to secure its nerve centre to the extent of allowing New York to be associated now with mass graves from COVID-19.

Mass graves are something the capitalist press has always presented as typical of failed states and so-called rogue states?

The second question has to do with the national security state of the US which runs those 800 military bases in more than 80 states and has since 2001-2002 also constructed an internal system of total surveillance called Homeland Security.

Shouldn’t Homeland Security include the public health of the population?

The revolving door called the military-industrial complex in fact represents a gargantuan investment of tax-payers’ money in sprawling military infrastructure and hardware which could not be mobilised this time to defend the people against COVID-19.

In other words, the coronavirus has exposed an obscene imbalance between the endowment of the military-industrial complex (mostly overseas) and the poverty of the public health sector at home.

The emerging view is that the home population is the real public when it comes to expenditure of tax money, not those foreign countries hosting US military bases and hardware.

The third question revolves around the slogan ‘Too Big To Fail’ which was coined to justify using the state to rescue private corporations which have failed or gone bankrupt as a result of crisis.

Given the doctrine about the supposed superiority of private capital against public capital, it should have been private companies rescuing the state in times of crises.

But in terms of real living history, tax-payers footed the bill to rescue private companies following the crises of 2001-2002; 2008-2010: and now 2020; just as it is the same public taxes which pay for military expenditure abroad which failed to rescue the people from COVID-19.

The fourth question has to do with the Western-sponsored human rights doctrine and unilateral sanctions.

The US has more than 8 000 separate sanctions against other nations, their corporations and other entities.

And since the end of the Soviet Union, US propaganda has presented unilateral sanctions as consistent with the promotion and enforcement of human rights against so-called rogue states.

And for a long time as well, a few academics, researchers, associations and most countries of the South have protested against unilateral sanctions, viewing them as at least contradicting the doctrine of human rights if not actually intended to deny the human rights of masses of people who are neither politicians nor policymakers.

Now, what the COVID-19 pandemic has done is to make clearly glaring the fact that health and, especially, public health services for the majority have been among the first to be destroyed through unilateral sanctions.

This is because many organisations interested in mitigating the impact of the COVID-19 pandemic in countries under sanctions have directly noticed that sanctions make it impossible to bring in the equipment and supplies needed to mitigate effects of the pandemic.

If sanctions had all along been a progressive instrument for supporting human rights, then the sanctions regime would have been most helpful in fighting COVID-19.

It has become clearer to third parties that, all along, so called targeted sanctions were, in fact, targeting health services.

This embarrassment explains why US President Donald Trump’s response to COVID-19 has been meant mainly to find others, anyone, to blame, including scientists and the Director General of the World Health Organisation (WHO).

Suddenly, many third parties are accusing the US Government of mass violations of human rights, both at home and abroad, because of the realities which the global fight against COVID-19 has brought to the surface.