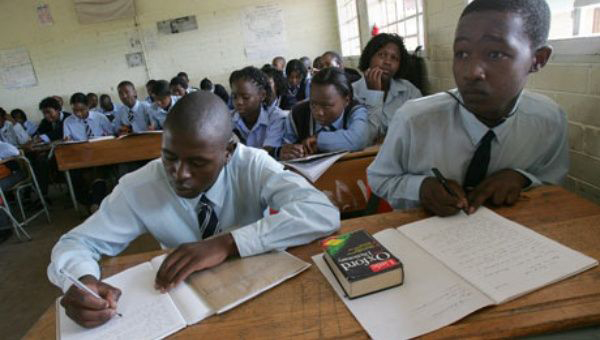 WE continue our discussion on the role of English language in blocking the majority from pursuing higher education and tertiary training.

The idea is to raise the awareness of the majority on the colonial legacy of English which has fettered most Zimbabweans, preventing them from advancing their academic and professional careers.

This is a protest article.

We must change, and with the coming of the Education 5.0, we should change to embrace our indigenous languages.

One must wonder how we, as Africans, hope to develop our economy when we use a foreign language, English, to discriminate and exclude the majority of the population from meaningful participation in the mainstream affairs of the country.

Can the exclusive club of English (French, Portuguese)-speaking indigenous Africans bring about the development of the African countries?

We need all shoulders to the wheel but when you fail to communicate with the majority, you are likely to walk forward alone and you will not get far.

For Zimbabwe, do we not need more of our compatriots to participate in the national economy for it to grow?

Our development agenda is our ‘nhimbe’.

Let us invite Zimbabweans to participate in developing our country in the 16 languages that they variously understand.

Full participation by all citizens in the development process is vital.

However, with English as a means of communication, few know where we are going.

There are many leaders at all levels who are striving to communicate with the people.

Only a minority of them strive to use our own indigenous languages to communicate with the masses.

Others think that people will laugh at them for speaking in an indigenous language, kuti havana kufunda (They are not learned). But nothing is further from the truth.

Only fools will laugh at someone touted as being uneducated?

Otherwise we will ask: “Wakafundei?” (What are you educated in?)

May be even your English grammar is suspect!

If you are educated, come use your learning to solve our problems! Do not come to pontificate to us in a foreign language!

Did you learn how to produce food?

Right now, if one looks at Zimbabwe’s challenges and the 94 percent literacy rate, one is bound to think: But these people are highly ‘educated’!

Why are they failing to develop their country?

The simple answer might be: You say these people are highly educated? What kind of education did they receive with things as they are here?

If our invitation to citizens to join the fight for economic development at various fora and through various media are put in a language that is not well understood by the invitees, that is the people, then nobody will respond or very few will come.

If our debates on the economic way forward are carried out in English, we will never benefit from the ideas of those who think in their mother tongues!

Under the new Education 5.0 design, more students should be able to show their true potential to contribute to socio-economic development if the English language barriers are removed.

Let us allow as many of our youths as are keen to participate in developing our economy to do so; not to use English language passes at ‘O’-Level to discriminate and marginalise!

The impact of ‘failing’ the ‘O’-Level school leaving certificate on the back of just one subject, English, is a travesty of justice; it is a tremendous psychological blow on the ego and confidence of thousands of Zimbabwean students, teachers as well as the parents/guardians who commit significant  proportions of their hard-earned incomes to fund their children’s schooling.

How can one subject, English, nullify the passes in other subjects? It does in Zimbabwe where ‘O’-Level certificates are as good as failures as long as the candidate did not score a ‘C’ or better grade in English!

How diabolic can the education system get when it condemns whole generations of young Africans to the fringes of educational and economic participation on the basis of ability to read and write a foreign language?

Thousands of these so-called ‘failures’ gobble up more of the nation’s scarce resources to resit the English language examination again and again.

Many eventually give up, demoralised and ‘convinced’ they are abject failures.

Many even become drug addicts, and yet many of these candidates would have passed other subjects also taught through the medium of English, with good grades.

What kind of justice is that?

That the foreign colonial language, English continues, to be allowed to block the education and training aspirations of generations of an entire independent nation like Zimbabwe, which fought a bloody war to liberate itself from British colonial bondage, is a real scandal!

Clinging to English as the golden standard of being ‘educated’ demonstrates the depth of our collective colonised mentality.

We implore Zimbabwe to wake up!

Many may not agree with me but, if truth be told, the educated elites are the most intoxicated with the English language; it is an obsession!

It is they who resist the restoration of African dignity through adoption and promotion of our mother tongues as mediums of instruction in schools.

The economic advantages enjoyed by African elites are often associated with their elevated social status which rides on English literacy and proficiency.

With all official communications, documents, conferences, industrial brochures and equipment manuals being written in English, those not proficient in the Queen’s language belong to the social and economic dustbin.

That must change for Zimbabwe to achieve Vision 2030.

We are not advocating discarding the English language per se, but because we are not English, we want our own languages to develop as part of the restoration of the dignity of the blackman. It is not a competition; it is African development with local languages as the main pillar.

The English language is now a curse of some sort.

We must exorcise this goblin called ‘O’-Level English.

Let it be a normal school subject, not the chains that continue to hold the whole nation to ransom long after we thought we had fought to free ourselves from British colonialism.

The programme to restore our local indigenous languages to glory will require the educated to work hard to develop the instruments that will sustain the 15 languages we want brought on board.

We must replicate the excellent efforts of the African Languages Research Institute (ALRI) operating at the University of Zimbabwe. The work must be done in stages, but it must be done for all our designated official languages.

The dominance of English in all spheres of Zimbabwean life has created generations of Africans whose innovativeness has been killed by being made to believe they are dull because they could not pass an English language school examination.

However, the truth, in most instances, is that students do not fail to master the subject matter but the unfamiliar foreign language used as medium of instruction blocks access to the concepts being taught.

The foreign language bars them from fully engaging with the content and substance of the course/subject taught.

They fail to understand the language before they even get to the subject content.

The evidence in support of using indigenous or mother tongues for school instruction is overwhelming.

It will be presented in future instalments in this series.

We should use English the same way other nations do: access a wide variety of information sources and for communication where necessary — but not to determine who proceeds with education!

We must free ourselves from mental slavery and the shackles of what should be just a communication tool, the English language. We are our own liberators!