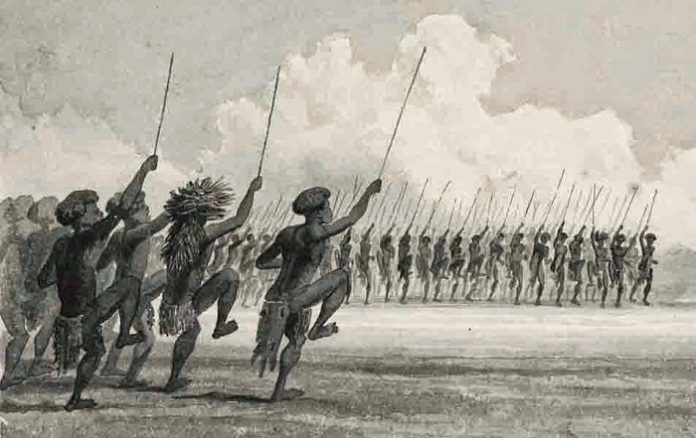 On June 13 2016 mukoma Felix Ngwarati Muchemwa left us. The guerilla medical practitioner breathed his last after serving Zimbabwe illustriously in sickness and in health. Rtd Brigadier General Dr Muchemwa bequeathed us an unparalleled and unquestionable legacy about our land, the cause and cost of our armed struggle.

This article and the next three are dedicated to his eternal memory, lest we forget who we are and what we are about.

SO much harshness and cruelty was unleashed on our people during the liberation struggle but the people were not cowed.

They fought relentlessly until they drove out the British.

According to Muchemwa: 2015: the battle for Matabeleland (March to July 1896): “…started with a war dance by Ndebele warriors at a cattle village in Essexvale (Esigodini).

The war dancers were warriors from the Indunas (Chiefs) of Godhlwayo, including chiefs Maduna, Mahlabeni and Mafu. The dance was remarkable for its military zeal and anger against the BSAC Native Police deployed by the Native Commissioner on March 20 1896.

In the melee which followed, a policeman and a war dancer were killed and the war dancers escaped to the Matobo Hills.”

The seasoned warriors knew it was a fortress they could trust, it was impregnable.

After the invasion of Matabeland in 1893, masterminded by Leander Jameson, the British seized over three-and-half million hectares of land, representing “…virtually 100 percent of the only habitable land the Ndebele could live on.” (Muchemwa: 2015)

The British looted all Ndebele cattle and, for these fundamental reasons, the Ndebele took up arms.

The British denigrate the justice of the First Chimurenga, claiming the Ndebele were not angered by these catastrophic dispossessions.

In his report on the First Chimurenga in Matabeleland, Earl Grey insists the Ndebele rose against whites because they were not completely broken in the war of 1893, that they were too proud to submit to their ‘natural’ place beneath the whiteman’s rule.

He disdainfully dismisses them as a ‘superstitious and ignorant lot’ who blamed the whiteman for drought, rinderpest disease and locusts.

There is something intolerably insidious in Grey’s assertion that ‘the natural place for the Ndebele is under the whiteman’s rule’.

By what law, except racism, is it normal and natural to be under the rulership of a foreign race which usurps your sovereignty by force of arms?

The whiteman’s self-deception blew up in his face when the war dance started.

The timing of the First Chimurenga was strategic.

Jameson had taken most of the white forces to SA to fight against the Kruger Government in the Transvaal.

Once the war dance started, the First Chimurenga spread like veldfire.

The whole of Matebeleland and the Midlands was galvanised.

Chimurenga forces killed whites and drove away thousands of cattle the whiteman had looted.

It was a long while before the whites could mount a credible counter offensive.

At the heart of the First Chimurenga was Mwari.

Mukwati, the high priest of Mwari ensconced at Ntabazikamambo, co-ordinated the First Chimurenga from Filabusi, right up to Gweru, Shurugwi, Amaveni and Shangani, in collaboration with other spirit mediums and regimental commanders.

When whites launched their counter-offensive, they were gutted by Chimurenga forces.

In Gwanda, at Manz’amnyama, the Manyakavula and Ematshetsheni people under the command of Manyakavula, Lobengula’s nephew, defeated Brand’s 100 mounted men who had the advantage of a maxim gun, forcing them to retreat after suffering heavy casualties.

At Umgusa was the final edict.

It was the writing on the wall.

Starting off with 42 mounted men under Grey, the whites were forced to call for reinforcements five times, bringing their force to a battalion of 820 soldiers armed to the teeth. Chimurenga forces gutted them on April 25, defeating the battalion despite its advanced weapons such as the maxim gun, the seven pounder and the hotchikiss.

Thus was won the battle for Matabeleland; it was only a matter of time.

After this final victory, 2 000 Chimurenga warriors surrounded Bulawayo armed with Martini-Henry rifles; an unmistakable and unequivocal message to whites — time out, leave!

Having lost the war, whites scrambled to prop themselves. They called for reinforcements from England.

When the British troops arrived, Chimurenga warriors changed their strategy.

In the north, they retreated to their traditional fortress of Ntabazikamambo Hills and, in the south, Matobo Hills.

Emboldened with reinforcements from Britain, from South Africa and an arsenal consisting of the latest models of the following weapons; seven pounders, mountain guns, hotchkiss, maxim guns and dynamite explosives, they stormed Ntabazikamambo on the morning of July 5 1896.

Unbeknown to them, Chimurenga warriors had read their genocidal intent.

Hundreds of them had escaped during the night.

Members of the royal family, regimental commanders such as Nyamanda and Siginyamatshe and their regiments had escaped to join others already ensconced at Matobo Hills.

Others had escaped to the Somabula forests, witht the rest to the Bembesi River Valley.

Next, the British targeted the warriors ensconced in Matobo Hills, but the fortress was impregnable.

Muchemwa 2015 says: “Each attack drew out gunfire and jeers from Chimurenga warriors who moved with ease from behind one rock to another, shooting back at European soldiers struggling up the difficult terrain.

After one week of intensive fighting, over 20 European fighters lay dead and nearly 50 were wounded, but no casualties among Chimurenga forces.”

Thus, Rhodes had no choice but to accept that the whiteman had lost the battle for Matabeleland.

He, therefore, urgently offered to negotiate with the Ndebele warriors; ironically much in the same way that his successors realised they had lost the Second Chimurenga in 1979 and called for Lancaster to negotiate their terms of surrender.

The subsequent indabas were not an easy ride for Rhodes. Chimurenga warriors demanded the reinstatement of their ancestral lands right up to the third indaba on September 9 and Rhodes had no choice but to agree.

However pressure from drought, famine and rinderpest also reduced Chimurenga warriors’ capacity to continue the war for much longer and this gradually limited their leverage in the negotiations.

They also knew the whiteman could endlessly call for reinforcements and would not hesitate to carry out genocide.